Transporting massive concrete bridge beams over the precipitous Arthur’s Pass during the past winter has been a challenging project – and an eye-catching one too, captivating tourists and birdlife alike. BY MARY SEARLE BELL. 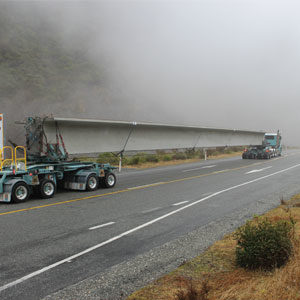 At Kumara Junction, where State Highway 73 joins State Highway 6, just south of Greymouth, the Taramakau Bridge is being replaced.

The existing bridge is a narrow single lane affair that carries both road and rail traffic. As the route is an important connector between Christchurch and Greymouth, the New Zealand Transport Agency thought it prudent to upgrade the bridge to better accommodate traffic.

So while the existing bridge will remain in place and be used solely as a rail bridge, a new bridge is currently being constructed downstream by Fulton Hogan. The new structure will be 250 metres long, 10 metres high and 15 metres wide, and will provide significant improvements for travellers in terms of safety, travel times and journey experience – traffic will no longer have to wait at each end of the bridge before being able to cross the Taramakau River.

The project, which is due to be completed next year, will also see a section of State Highway 6 realigned and an overpass built to take road traffic over the railway line.

As part of the new bridge build, Fulton Hogan has been manufacturing massive concrete Super-T beams in its Stahlton precast concrete factory in Waterloo, Christchurch, and transporting them across the mountainous Arthur’s Pass to site.

The road is narrow, and steep in places, with plenty of corners. To make things even more interesting, this heavy haulage project began in May, just as the weather turned sour for winter.

The beams measure around 34.5 metres long and weigh in at 66 tonnes each. There are 42 in total, and when Contractor spoke to Fulton Hogan’s heavy haulage manager, Mark McNeilly, last month, there were just six left to transport.

“The weather’s clearing just as the project ends,” laughs Mark.

Each move has been subject to weather, and the move would be stood down if there was snow or a forecast of snow. Mark says they worked closely with the two teams of maintenance contractors who look after the road (Downers/Isaacs for Christchurch to Arthur’s Pass, Fulton Hogan for Arthur’s Pass to site) to ensure each trip was a success.

Before the 4am departure from the concrete plant to the first stop in Springfield, the on-road supervisor would get in touch with both maintenance teams to check the route conditions. What they wanted to know was how much snow and grit there was on the road.

“The wet conditions didn’t bother us but the frost and snow could cause problems,” says Mark. “Too much grit was a problem – it made things slippery, more so than frost – and sometimes there was too much snow on the road shoulders which meant we couldn’t put oncoming vehicles onto the shoulder.

“The maintenance guys would tell us where the grit and snow was.”

And while winter is a less than ideal season for this particular job, bad weather only delayed the beam transporter on four occasions.

From Springfield, State Highway 73 climbs the Southern Alps. The road is tortuous in places and has several old 10-foot bridges. To manage this, Fulton Hogan set its trailer at three metres width, and used a two rows of eight load divider with a four rows of eight jinker. The total train length was 48 metres, and the total weight was 96 tonnes.

“Other configurations would have put too much distortion into the beam,” Mark explains.

The majority of loads have been pulled by Fulton Hogan’s Christchurch-based Mack Superliner, with the remainder by the company’s Dunedin-based Mercedes-Benz SLT. The main truck was assisted by a six-wheel-drive Iveco Tracker tractor unit, ballasted to 21 tonnes.

The Iveco was there to help pull the load up the very steep climb at Porters Pass, especially if there was a lot of grit on the road. Also, after the summit at Arthur’s Pass, when the load descended the precipitous viaduct, the Iveco was in behind the load to assist it down the 16 percent grade.

The sharp descent over the viaduct and under the rock shute required the road to be closed to all other traffic – the Fulton Hogan crew needed every bit of the road to be able to get the beams around the corners.

Mark says there would be an amusing interlude at this point when the local kea, known for being a nosey species, would take a keen interest in the job underway.

“When we pulled up at the viaduct and got ready to descend, the kea were curious about what was going on. At first they stayed away, but after a few loads had been through, they decided that sitting on the beam was the place to be!”

The closure took around 15 minutes and was one factor in the team’s traffic management considerations.

“There is a lot of traffic at certain times of the day, including tourists, who can be a handful at the best of times,” says Mark.

“Twenty-four hours prior, we would send an email out to all the trucking companies, including Fonterra and Westland Dairies, to let them know when we’d be on the road ­– the professional drivers were very cooperative.

“But we had to be mindful of other drivers, and make allowances. A lot of tourists hadn’t seen anything like this before and would stop to take pictures – we often had to move them on to a safe place to do this.”

Each eight hour journey across the mountains ended at the site of the new bridge build. There, the beams were unloaded by a pair of cranes. Once free from their load, the two trucks and three pilot vehicles would make the return trip to Christchurch in a comparatively short three hours.

The day the trains started running