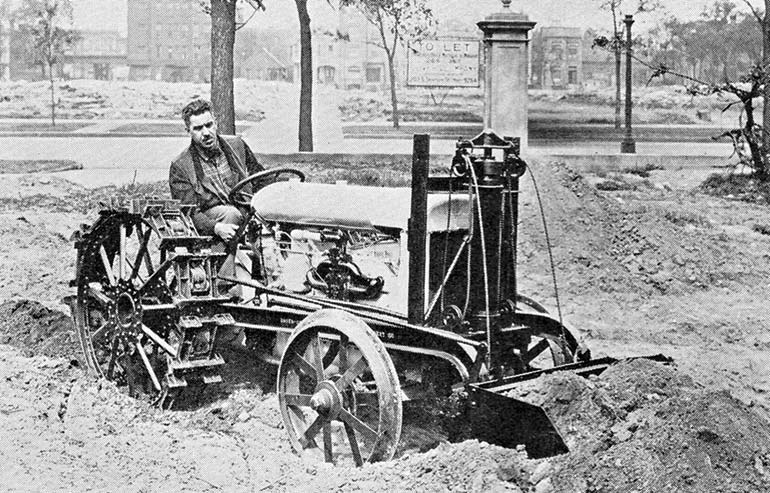 Among the many people who invented iconic, useful and lasting pieces of earthmoving equipment was Frank G. Hough (pronounced “huff”), Richard Campbell explains.

Frank Hough added a trademark to the world’s vocabulary – PayLoader – which became synonymous with all wheel loaders, regardless of manufacturing origin.

If somebody needed a “payloader”, you knew exactly what was required.

Hough was an engineer who had many good ideas and was a pioneer in the field of wheel loaders and wheel dozers.

He was employed in the mid 1920s as a design engineer of lifting attachments for a Chicago, Illinois company called Blair Manufacturing, whose products were known as ‘North Hydraulic Diggers’.

Blair built crude forklifts and loading devices which were attached to the front of wheel tractors of the day, notably Fordson, Case and McCormick.

These were moderately successful and demonstrated to the young Hough the potential market for a dedicated wheel loader.

Hough bought Blair Manufacturing outright during the height of the great depression in 1931, a risky move at the time but one that was to eventually reap big dividends.

In 1933, Hough changed the name of the company to Frank G. Hough Co., and set about designing a new range of equipment that could be fitted to wheel tractors such as buckets, bulldozer blades, sweepers, snow plows and other similar ancillary equipment.

At this stage in the company’s development, they were still designing equipment to suit other manufacturers’ tractors but Hough had also formed a loose affiliation with McCormick-Deering (later to become International-Harvester).

Hough’s first loader attachments utilised a form of forklift mast to which the bucket was attached and then dumped by tripping a latch with a hand-pulled cable.

Where Hough’s design differed from others of the period was that the mast was hydraulically raised and lowered, whereas his competitors used some form of cable winch to raise and lower the bucket.

A major move was made in 1939 to new premises in Libertyville, Illinois.

For the first time Hough had everything required under one roof – design, supply and manufacturing.

Not long after this shift, Hough’s first totally integrated wheel loader was released, the Model HS.

This was a small utility-sized wheel loader with a gasoline engine and a bucket capacity of around half a cubic yard.

Part of its innovative design featured the engine and transmission located in the rear of the machine forming a natural counterweight.

Hough added another, larger machine in 1941, the Model HL with a capacity of one cubic yard. It was around this time that the name “PayLoader” was applied to the range.

WWII put the brakes on further machine development with production given over to the manufacturing of military supplies.

One of the items built at the time for the military was a tow tractor to move air force planes around the tarmac. Following WWII, airfield tow tractors were to become another staple product for Hough and given the name “PayMover”.

With the cessation of hostilities things really took off for Hough.

There was a wholes world to rebuild out there and Hough were the largest player in what was quite a niche market.

The loader arm mechanism was completely redesigned and refined and many new models were introduced during this period, including for the first time, diesel powered PayLoaders.

Hough, through their association with International-Harvester, began utilising International Diesel engines in their wheel loaders.

This in turn, led to reciprocal business for Hough who were given the contract to manufacture and fit loader attachments for some of International-Harvester’s TD-6, TD-9 and TD-14 track-type tractors.

As can be seen, it was a very symbiotic relationship.

During 1947 three new PayLoaders were introduced – the Model HA (which was a redesigned HS), HL and HM.

The Model HM was very special for the company and marked a milestone in the evolution of the wheel loader, being the first 4-wheel-drive loader to be offered by any manufacturer. It was also highly influential and formed the basis of wheel loader design by many other companies for the next decade.

By 1949 the Model HE and HF had also appeared and manufacturing facilities had to be expanded to cope with the increasing demand for wheel loaders.

Hough’s (and the industry’s) largest wheel loader up to that point was introduced in 1952, the four cubic yard Model HW, and this marked another milestone for the company as it was the first wheel loader to be offered with planetary final drives.

The year 1952 was also the year that Hough was sold to International-Harvester and became a wholly-owned division of that conglomerate.

Frank Hough was kept on as chief designer and the PayLoader name was retained.

The machines were now sold as Hough PayLoader, a division of International-Harvester Corp.

With the additional financial resources that IH could provide there was a corresponding surge in wheel loader development.

During 1955 the models HAH, HH and HO were introduced. These were all wheel drive, rear wheel steer machines.

Hough was aware of emerging competitors, in particular Scoopmobile, who were offering an articulated steer machine.

The wheel loader market had, by this time, expanded enormously and Hough no longer had a captive audience, competition now coming from Case, Lorain, Pettibone, Tracto-Motive, Yale, Michigan, Euclid and Caterpillar.

In order to remain competitive, a new range of wheel loaders was designed and progressively introduced, but Hough persisted with rear wheel steer machines into the mid-1960s.

By this point, Hough had begun to use a new designation system (having run out of letters!) and began to identify their machines by an alpha-numeric code.

This was used as a new machine was introduced or upgraded so the model HA became the H-25, the HH became the H-30 and so on.

Hough entered into a deal with Komatsu in 1965 which saw some of the smaller PayLoaders manufactured in Japan under the brand name Kimco-Hough.

This agreement was terminated in 1981.

It would be nice if this story had a happy ending, but not so.

By 1982 International-Harvester were in dire financial straits and sold the entire Hough PayLoader line (which was still making a profit) to Dresser Industries.

Dresser continued manufacturing the line under their own name, but dropped the PayLoader and Hough references and so the name disappeared.

Dresser didn’t hang on to the line very long however, eventually selling it to Komatsu in 1988.

Hough’s legacy was a very rich one – the company built some of the smallest (H-25) to two of the largest wheel loaders ever to roam the planet, the H-400C and 580.

So, although the name has gone, the spirit still lives on within the Komatsu range of wheel loaders.

There is a substantial New Zealand connection to this story as the Ministry of Works, Borough Councils, County Councils and Local Councils all bought Hough PayLoaders, as well as private contractors in all shapes and sizes.

They were the mainstay of many public works jobs and saw service from North Cape to Bluff in all manner of jobs.

They were also some of the first wheel type loaders to be used on logging skid sites for loading out and stacking.

Frankly put, there weren’t many jobs that a PayLoader couldn’t do.

Alas, other than more recent International-Harvester loaders, there is little available to commemorate the innovation and ingenuity that was Frank G. Hough.

In the 1950s, an American toy manufacturer called Nylint made a 1/16 scale pressed steel model of a Hough PayLoader.

This was more of a generic machine rather than anything specific, and intended for the sandpit but it wasn’t too bad a model.

The irony of this is that these days, most of those Nylint models that survived are now on display in collectors’ display cabinets.<

The go-between – investing in youth