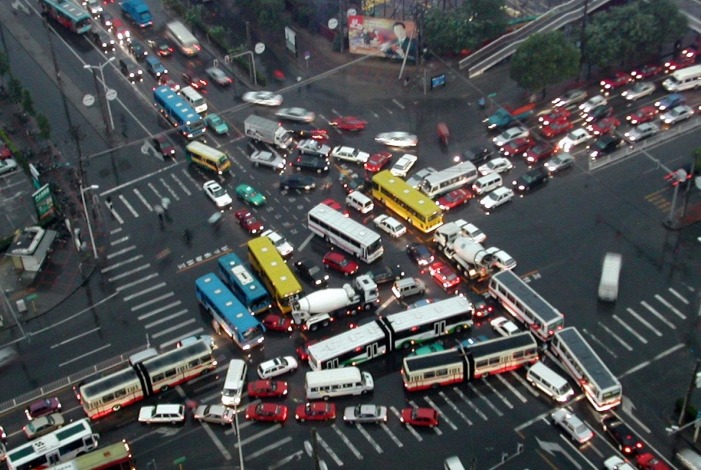 Auckland’s traffic is not as dense as many other cities such as Sydney and Beijing (pictured) but its traffic management leaves a lot to be desired.

A number of associations and members of the Auckland Business Forum are supporting the initiative of government to seek a negotiation with Auckland Council on an agreed 30-year programme focusing on reducing congestion, and boosting public transport where that reduces congestion.

Their views and suggestions were published in a transport supplement in The Business magazine of the Herald last month.

It is very clear that current plans are not making a significant difference to congestion, he says. A good outcome from government and Auckland Council working together would be a package of fast-tracked projects aimed at: Improving public transport services’ reliability and frequency; getting as much use as possible out of the current transportation system; removing parking from major arterial routes to create more usable road space; more high occupancy lanes to encourage a reduction of sole occupancy cars; strengthened integrated traffic management covering arterials and motorways; and expanding park and ride facilities at main trunk rail and busway stations.

“Good leadership is about partnership,” says Barnett. “It is about understanding that we have limited resources, so we must learn to prioritise correctly.”

An article in the supplement is written by Chris Burke, chairman of the Auckland branch of Civil Contractors NZ.

“To avoid Auckland’s economy grinding to a halt, the government and Auckland Council must quickly come up with a single agreed transport strategy that focuses action on the real issues affecting the movement of people and goods around the city.

“There are two big issues affecting Auckland’s building and construction industry: Congestion is costing civil contractors millions of dollars of downtime and lost productivity. The lack of coordination between construction clients, especially central and local government, means an opportunity is being missed, to bundle procurement, provide continuity of work and speed up delivery through a joined up approach.

“While government-commissioned reports indicate that traffic congestion is a major factor in productivity and efficiency losses in civil construction, Auckland’s transport plans fail to define the problem or offer solutions. That must be addressed.

“At just the time when the industry faces a huge construction programme, congestion is getting worse.

“The carriage of aggregates from southern quarries to building and construction sites around Auckland has become a nightmare. Likewise, the cartage of waste from construction sites, including major transport projects like Waterview, can vary from one to three hours.

“Having trucks sitting idle for hours a day at motorway on-ramps is not only a huge waste of time, it is also adding to the costs carried by operators or passed on to clients, as well as contributing to CO2 emissions.

“Congestion is costing trucking operators as much as a 20 percent reduction in revenue, which for large fleet operators can reach millions of dollars a year. For smaller companies, it is making businesses marginal unless they can pass the cost on to clients.

“Congestion has reached the point where many construction workers commute to their sites before dawn and depart after the peak. In other cases, construction sites are closed mid-afternoon so workers can get home for family commitments.

“Some obvious immediate actions are needed: NZTA and Auckland Transport need a fully integrated traffic management system – so proposals submitted over many years without any action can proceed. For example, enabling trucks to use arterial roads or busways (outside peak hours) without having to get on the motorway.

“[We need] a work programme to reduce choke points along the motorway system and accelerate the East-West Connector.

“At the heart of an Auckland-Wellington strategy must be an accelerated effort to improve the city’s public transport system. Getting single-occupancy commuter vehicles off Auckland roads during the day would free up the capacity for contractors, transport operators and other essential trades.

“From our point of view, we are in this for the long haul and if it takes debt to fund the solution, then all funding options should be considered objectively.

“We also acknowledge that the root cause of the growing congestion is a rapidly increasing population wanting to use a network with an almost fixed capacity. Supply isn’t keeping pace with demand.

“Long term, some form of demand management solution may be needed, as in other fast-growing international cities.

“Meanwhile, increased public transport funding is only viable if it does not impact on the activities of the people who build the city.

“That’s what civil contractors want to do – build to help meet Auckland’s growth needs, so people can lead lives in the confidence they can go from A to B without spending half their lives sitting in a vehicle in clogged traffic.”