Earthmoving equipment manufacturers are constantly modifying and improving their machines to make them perform better. Some of these modifications are beneficial, others open to question, but things never really stand still for long in the earthmoving world. By Richard Campbell

THIS WAS PARTICULARLY true for RG LeTourneau who was always striving to increase productivity and shorten cycle times.

Oftentimes major revisions would be undertaken on the production line in order to incorporate an innovation or two.

When he sold his company to Westinghouse in 1953, Westinghouse inherited a full range of up-to-the-minute machines featuring the latest in technology and earthmoving savvy.

Initially, LeTourneau-Westinghouse as the company was known at that point, did make some important improvements in the motor scraper (Tournapull) range.

For starters it standardised on GM and Cummins engines and tidied up a lot of the electrical problems which it had inherited with LeTourneau’s new post- WWII scrapers.

They didn’t fix all the problems but certainly enhanced the machines’ reliability. America was entering a major infrastructure building programme with the commencement of the Interstate Highway projects and LeTourneau-Westinghouse wanted to ensure that it got its fair share of the market.

During the period 1954 through to 1961, LeTourneau-Westinghouse continued to pump out Model B, C and D Tournapulls with not very many changes other than to engines or transmissions as improved versions became available.

There were cosmetic alterations, but these were mostly to accommodate the fitting of new powerplants, most notably the change in the C Tournapull from GM 6-71 to GM 8V-71 engines.

However, time was rapidly catching up with LeTourneau-Westinghouse. Its competitors, who had quadrupled in number following the war, were now catching up.

Caterpillar, Euclid and Allis-Chalmers were making strong inroads into LeTourneau-Westinghouse’s marketplace and the company realised that it could not rest on its laurels any longer.

In early 1960 design studies began on a new Tournapull, the model C-500 as it was to be known.

This was a major departure from the company’s existing Tournapulls as it was a completely new design and bore scant resemblance to its (then) current product range.

The C-500 was designed around a modular concept where engines or an extra bowl could be added or subtracted at the owner’s discretion to suit the machine for multiple roles, increasing horsepower, capacity or both.

It also advanced the cause of service accessibility, the whole modular concept being about speed of set up and tear down. The heart of the system was the C-500 tractor, powered by a General Motors 8V-71 diesel rated at 275 horsepower.

As with other Tournapulls, a generator was bolted to the engine’s flywheel to provide full electric control for the machine’s steering and bowl functions. This was a larger generator than usual as it was to supply power to an extra bowl if fitted, as part of the modular system.

A Twin-Disc powershift transmission was remotely mounted and provided four speeds up to 30 miles per hour. Brakes were full air-operated multiple disc, a system LeTourneau had pioneered for earthmoving equipment.

Steering was via the usual LeTourneau- Westinghouse vertically mounted electric motor in the hitch driving a ring gear on the tractor, a system common to all the other electrically steered Tournapulls. Limit switches prevented the motor exceeding 90 degrees either side of centre. However, the tractor unit was radically different looking from any other Tournapull as it was very ‘squared off’ in design and situated the operator out on the left side in a self-contained cockpit.

There was no steering wheel, all operations being controlled by electric switches apart from brakes, throttle(s) and transmission selection.

The scraper held 16 cubic yards struck and 21 cubic yards heaped and was based on elements of the existing C “Fullpak” scraper but with one important difference.

This was the method of ejection, which in existing Fullpak scrapers was by powered cable but in the C-500 by electrically operated rack and pinion. It was designed in this manner to allow an extra engine (known as a “Pushpak”) to be
fitted in the rear to turn the machine into a twin powered scraper. This was not possible with the existing electric motor/cable ejection setup.

As mentioned previously, an extra bowl could also be attached if required and the mountings were incorporated into the scraper’s rear push frame structure to accept it. Adding the extra bowl effectively doubled the machine’s capacity to 42 cubic yards.

The machine made its debut in 1961 and was promoted heavily at the time. As can be seen, it was quite a handsome and businesslike-looking beast. It was also during this period that LeTourneau-Westinghouse began using the ‘Wabco’ name on its machinery.

However, despite all this wonderful innovation, this is where the story gets sad. Had LeTourneau-Westinghouse embarked on the C-500 programme earlier it could well have had a winning machine on its hands.

But one of the major drawbacks of the type lay in the fact that the scraper was still an all-cable controlled machine when the industry had already embraced hydraulics.  The following year (1962), Caterpillar introduced its ‘600’ series, with the only cable operated machine in that entire line up being the soon-to-be-discontinued 619C.  Regrettably, the writing was on the wall for the C-500.  Sales were low and the type was discontinued during 1964, no more than 70 units being manufactured.

Unfortunately none. New Zealand distributor for LeTourneau-Westinghouse at the time, Fredric W Smith, did not import any C-500 Tournapulls into New Zealand.

The New Zealand motor scraper market was dominated by Euclid and Caterpillar and I suspect the modular concept that the C-500 promoted was just a little too advanced for NZ contractors of the day.

It will come as no surprise to the collector that there are no models of the LeTourneau-Westinghouse C-500 Tournapull in any scale.

The closest thing available is a 1:50 scale “Standard C” scraper made by EMD Models in Europe which depicts a 1964 GM 8V-71 powered long nose Tournapull with the option of a tandem scraper setup.

This model is ridiculously expensive and is only for the collector with really deep pockets! On top of the high asking price, it will still require some work to make it accurate.  As an interesting aside, for those of you who had Tonka Toys in your childhood, the Tonka “Mighty Scraper” is broadly based on the LeTourneau-Westinghouse C-500! ABOVE Late C-500 Tournapull with the extra tandem “Fullpak” scraper in tow. This is a very rare photograph of an actual contractor’s machine, given so few of the C-500s were sold. This machine is obviously not expected to encounter any
grades of significance as the rear scraper does not have the extra engine, or “Pushpak” installed.
BELOW LeTourneau-Westinghouse C-500s operating as twin powered machines in the hills. On the side of the descending tractor unit’s hood you can clearly see the Farr air intake and dust ejection system which was common to all C-500s.
Note also that the scrapers have been sideboarded to increase their capacity to probably around 24 cubic yards. 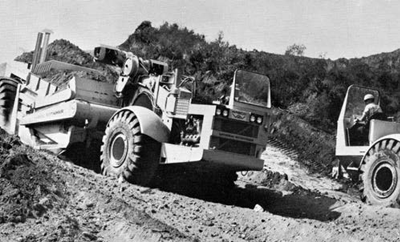