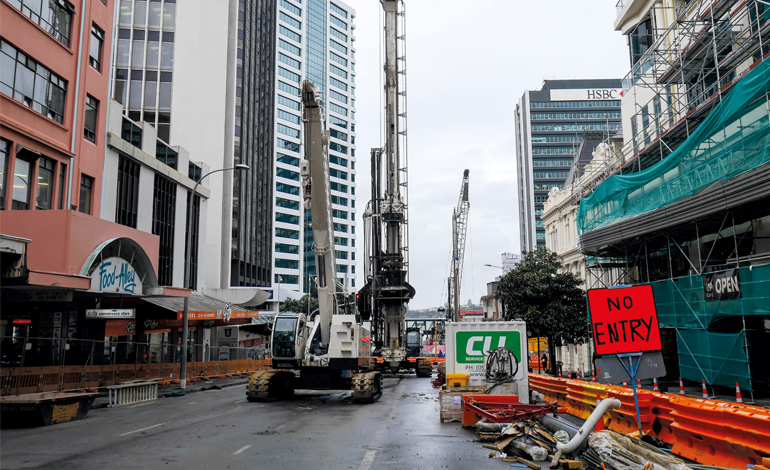 Aucklanders knew the disruption was coming and now it is upon them as Albert Street becomes a temporary construction site. But after the pain will follow significant gain for the city’s transport infrastructure. CHRIS WEBB explains how it is being constructed.

DESPITE THE DISRUPTION to Auckland’s CBD, the much-heralded City Rail Link (CRL) signals welcome relief to commuters and others wanting to access the city centre.

This country is getting used to receiving new and unusual construction plant to its shores. Alice, the tunnel boring machine used to construct Waterview’s underground route, is a case in point.

Now there’s a new machine in town – a 170 tonne Soilmec SR100 double rotary cased continuous flight auger (CCFA) piling rig, which cuts something of a profile in downtown Auckland. Nicknamed ‘Gomer’ and claimed to be the first of its kind here, the rig is well travelled, having completed projects in Copenhagen, Denmark, and later Oman. The machine measures 5.1 metres wide and 11 metres long, with a mast some 29 metres in height. Built by Soilmec and operated by Trevi Construction, the machine began working for Connectus, the McConnell Dowell Hawkins joint venture charged with building this part of the CRL, last May.

When Contractor spoke to Trevi’s project manager, Marco Lucchi, late last year, the machine had completed 50 of a total of 360 piles required for a challenging deep excavation exercise in Albert Street and surrounds in advance of cut-and-cover works for the tunnels needed for the CRL. The nominally 762mm diameter piles will form a retaining wall to enable excavation for the construction of running tunnels to form the first part of the CRL. The piles are being driven in the East Coast Bays Formation rock.

The piles, up to 20 metres in length, are being bored using CCFA technology so as to preserve the integrity of adjacent ground next to large buildings. They are bored within casings which are retracted while self-compacting concrete (SCC), using a special mixture of binders and additives, is simultaneously injected. The rig’s 480 kilowatt power engine gives the unit a 300 kilonewton metres of torque. “It’s more than capable of this task. The only restraints on its progress are the restrictions on working close to buildings, traffic constraints and those of working in a busy city centre environment. Progress could certainly be better, but we’re working in a very congested area, which means we lose the productivity we could [otherwise] have. This machine could double the productivity in an open area. But three to four piles average a day means we will meet our target and programme.”

Progress is determined also by the vehicular access to the site. Two to three concrete trucks are needed per pile, along with those needed for spoil disposal (another eight to nine a day) and delivery of steel reinforcement cages. It’s a “logistical challenge”, says Marco.

Early works included sinking the shafts for the construction of 520 metres of new stormwater pipe under Albert Street, largely replacing the existing structure in advance of the main tunnelling works. This is being achieved by a TBM called Valerie and the Akkerman 720 machines that drove the 2.2 metre diameter horizontal works for the stormwater diversion. It is over a year into the project, and Scott Elwarth, Auckland Transport’s CRL construction manager, told Contractor as the Contract 2 shafts were being completed: “We’ve got past the obstacles posed by the utilities and we can see the plan to construct the temporary station at Britomart going according to plan.

“By January we will have shut down the CPO [Central Post Office] and there’s to be a temporary facility in Commerce Street. It’s all about delivering the project while keeping all the stakeholders happy. We have a rule book to follow; our aim is to provide uninterrupted services while demonstrating reasonable productivity.”

June/July 2016: The initial works include the new stormwater pipe under Albert Street so the existing one can be removed when the City Rail Link (CRL) work starts.

The earliest opening date is 2023 and in September 2015 the total cost of the project was estimated to be between $2.8 billion and $3.4 billion, according to Associate Finance Minister Steven Joyce and Transport Minister Simon Bridges. In September 2016 the government and Auckland Council signed a Heads of Agreement to jointly fund the project.

The project consists of an electrified, double-track rail tunnel underneath Auckland’s city centre, running for approximately 3.5 kilometres between Britomart Transport Centre and the Western Line, connecting to the east and west of Mount Eden Railway Station. Designed to cater for 30,000 people on the rail network at peak hours – double the number currently – while slashing travel times across the rail network, CRL aims to help free-up disjointed rail travel in New Zealand’s most populous city.

Contract 2 is the first CRL contract to be let and involves the construction of 350 metres of twin cut and cover tunnels along Albert Street, between Custom Street and Wyndham Street.

It also involves diverting an existing stormwater tunnel that runs under Albert Street through the CRL project extents. The tunnel was constructed in the mid-1930s and runs down the centre of Albert Street at depths of up to 18 metres. The diversion will be constructed by pipejacking a 2.0-2.2 metre pipeline along the eastern side of Albert Street between Swanson Street and Wellesley Street. There are four shaft locations at the intersections with Albert Street and Swanson, Victoria and Wellesley Streets. The total length of the stormwater main is approximately 520 metres.

The CRL tunnels, amounting to a length of 3.4 kilometres in total, and rising 70 metres from Britomart to Mount Eden, will be constructed through ground that varies between rock and soft soil.

The middle section of the tunnel, between Aotea Station and the turnout tunnels near Mt Eden Station, will be excavated in East Coast Bays Formation rock.

These twin seven-metre diameter tunnels will be driven by the TBM, installed first at Mt Eden Station and driven, first, downhill in a northerly direction to the new station at Karangahape Road, then onwards to Aotea Square. In this section the sandstone is typically a weak rock so this tunnel section is well-suited to construction with a TBM with the turnout tunnels being constructed using mining techniques.

Upon construction of the first tunnel, the TBM will be removed and reinstalled at Mt Eden for construction of the second, parallel, bore. Though driving ‘uphill’ is more typical in projects using TBMs, usually as a means of simplifying ground dewatering, CRL civil design manager, Darryl Wong, says such an option is not possible in this case.

That would have meant, says Wong, introducing the machine and servicing it in one of the busiest areas of the city, where mucking out and concrete segment supply would have untold disruption consequences during construction.

The two ends of the tunnel (Albert Street and south of the turnout tunnels to the existing Western Line) will be constructed using cut-and-cover techniques owing to their relatively shallow depth below existing ground level. The sections of the cut-and-cover tunnels between Britomart and Aotea Stations require the section at Lower Queen Street to be constructed in stages to allow continued pedestrian flows between Customs Street West and Quay Street.

The Zurich Building section will be constructed in bottom-up stages with access from Queen Street. The section within Queen Elizabeth II Square and Commercial Bay (a 39-level $680m tower to be built on the site of the recently demolished Downtown Shopping Centre) will be entrusted to Precinct Properties to construct.

The crossing under Customs Street West requires staging between the north and south sides with alternate requirements for traffic management, excavation and construction of the cut-and-cover structure. Similarly, Albert Street needs to maintain traffic access. Preparation works include relocating the street furniture, adjustments to footpaths, protecting and/or relocating services, construction and excavation.

In memory of Pauline