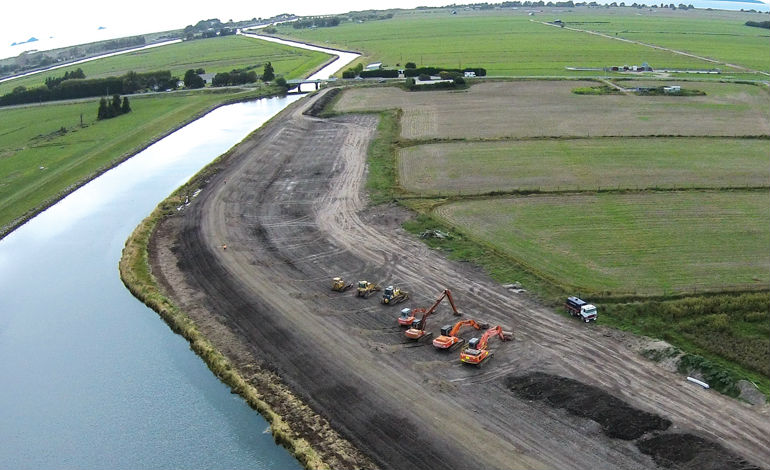 Stage by stage, a vital protection scheme is progressing to combat floods that have periodically devastated areas of the eastern Bay of Plenty for more than a century. GAVIN RILEY explains.

BY THEIR HIGH-PROFILE nature, civil construction projects such as Auckland’s infrastructure, the Christchurch rebuild, and the seven Roads of National Significance attract a welter of publicity. Other projects remain under the radar even when their skilful execution may be crucial in helping to prevent a regional disaster.

The Rangitaiki floodway scheme in the eastern Bay of Plenty is firmly in the latter category.

Consent for this lengthy undertaking was granted in 2009, three stages have been finished, and another five are scheduled before the project’s completion in 2020.

Its purpose is to take pressure off the flood-prone Rangitaiki River by diverting some of its flow to a waterway known as Reid’s Canal. The scheme’s effectiveness is vital to the area’s future well-being – as local history clearly indicates.

Though official records have been kept only since 1949, it is known that major flooding of the 155 kilometre long river occurred in 1906 and 1925. Due to lack of preventive measures, there was more flooding over the next 20 years, with thousands of hectares of land inundated and extensive damage caused.

Between 1944 and 1983 the level of flooding was reduced to below that of 1925 by the construction of 109 kilometres of stopbanks on the main river and major canals, the erection of flood walls in Edgecumbe and other urban areas, and the building of Reid’s Canal.

However, problems continued. In 1987 the Edgecumbe earthquake damaged flood-protection systems and works had to be carried out to repair stopbanks and improve flood controls. Then in 2004 a near-disaster struck – flooding breached a stopbank south of Edgecumbe, sending more than a quarter of the water in the swollen Rangitaiki River onto the plains and overwhelming the Reid’s Canal floodway.

If the waters had entered Edgecumbe substation they would have knocked out power supply to the entire eastern Bay of Plenty. As it was, they reached residential areas, part of the Fonterra factory on the edge of town, and thousands of hectares of farmland and associated property infrastructure. Roads were closed and there was an estimated $50 million in damages and lost production.

Bay of Plenty Regional Council’s Rangitaiki floodway project to ease pressure on the river started in 2011-12 when Hickey Contractors from Rotorua carried out stage one, which involved new stopbank construction and considerable geotechnical work. The total value of the stage was $3.2 million.

“One of the reasons we had a major failure in 2004 was because of a geotechnical failure on the Rangitaiki River,” says Regional Council works engineer Arch Delahunty, who has been involved in all three stages of the project to date.

“In 2012-13 we didn’t do much on the floodway because we were moving downstream and had an issue with local landowners buying into the project. A few of them didn’t agree with what we were going to do. It took 16 months of negotiating before they signed up for it.”

Waiotahi Contractors of Whakatane and Doug Gerrand of Papamoa jointly carried out the stage 2A contract in 2013-14. This work involved canal widening, stopbank reconstruction or rebuild, and more geotechnical work. The total value was again $3.2 million.

“With this stage we worked on the properties of landowners who had been questioning what we were doing,” Arch says. “When we went to sign them up for stage 2B, last summer, they had no hesitation in doing so. They were very satisfied with the way the Regional Council had dealt with the reconstruction and all the other issues we had to deal with on their properties.”

Stage 2B, which began in September 2014 and finished in late May this year, was carried out by Doug Gerrand, which was founded more than 40 years ago as a specialist stopbank and large-scale river-control works contractor but now also does general contracting and manages two large landfill sites in Whakatane and Rotorua.

The five stages remaining in the floodway project include the section below the Matata-Whakatane highway, raising the stopbanks from the McLean Road area to McCracken Road, constructing a modified spillway to allow water to flow from the Rangitaiki River into the floodway, and designing the stopbanks with flatter slopes to allow farmers to work their land more easily.

Geotechnical work will be undertaken as part of the project works and fencing will be installed to restrict stock access to waterways.

Bay of Plenty Regional Council environmental engineer Mark Townsend is the project manager for the remaining five stages. “With the current long-term plan we took the opportunity to shuffle things around so they went in a more logical order,” he says.

“We can view it as two separate projects – a continuation of the widening, then stopbank-raising further upstream. No widening, just lifting of the stopbanks.”

He says the $2.05 million stage 3A, programmed for the 2015-16 construction season, will involve working on the right bank of the floodway downstream section, from Thornton Road down to the confluence with the Rangitaiki River. There will also be some widening upstream, where stage one was, and the replacement of a bridge there.

As part of getting ready for the stopbank-raising there will be geotechnical testing of the upstream stopbank. Also, as part of the geotechnical work, a wick system and drainage trenches will be put in behind the stopbanks of stages 2A and 2B to control a seepage outlet.

When asked if the floodway scheme has proved successful so far, Mark replies that there hasn’t been a breach since 2004.

He admits to concerns over the possible effects of climate change, including erratic weather patterns and rising sea levels. “It’s big thing for us, through all our schemes. We’ve got some major projects, which I won’t go into now, where we’re looking at exactly that, and basically the sustainability of all our schemes.”

Mark does not know of any area of New Zealand that has a floodway scheme of greater magnitude than the eastern Bay of Plenty’s. “In terms of the capital works we’re undertaking, there’s no one doing more that I’m aware of.”

Arch Delahunty says the reality is the council has 11.25 kilometres of floodway. “That’s a significant footprint and, as we’ve alluded to [in this interview], we’ve also got major geotechnical problems.”

He says stages 2A and 2B of the scheme attracted six and eight tenderers, including nationwide companies, and that leaves him feeling “pretty comfortable” with the contractor resource available for the remaining stages.

Mark believes the parcels of work the council has set out over the next five years are manageable by those teams. “We don’t think the volume of work could cause difficulties for us. We think we’ve got the measure about right,” he says.

Worthington Contracting: from strength to strength