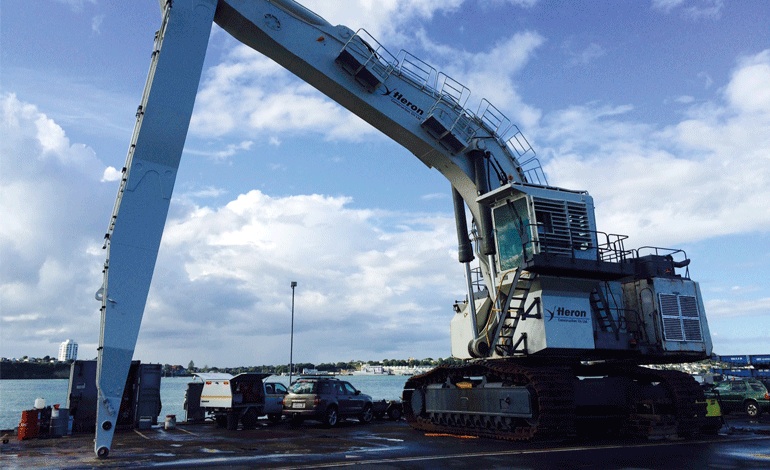 One of the largest excavators used in this country for civil construction, the Liebherr R9250, has arrived from a mining site in Panama for underwater work in Auckland. By ALAN TITCHALL.

AT 250 TONNES it wasn’t the largest excavator in the country – that title goes to a 400 tonne R9400 monster working at Rotowaro opencast mine – but it is not common to see a machine of this size on a civil construction project.

With shovel attached, the Liebherr R9250 weighs in at 253,000 kilograms. The machine is designed for high productivity mining sites and smartly filling fleets of 100 tonne dump trucks.

So how it ended up working on the first new wharf to be built at the Ports of Auckland since the early 1980s is a long story, and involves a mine in Panama, three months of assembly, Tranzcarr Heavy Haulage, Heron Construction and Brian Perry Civil.

Ports of Auckland obtained consent for an extension of the Fergusson container terminal upgrade back in 1998. This included construction of a new east-west wharf at the end of the old, 650-metre Fergusson wharf (the longest container wharf operated by Ports of Auckland).

In 2015 the port was in the news for a project to extend two wharves at the other end of the port a bit over 90 metres north into the harbour. Consent for this project was revoked by the High Court after a media beat-up and public commotion about stealing harbour views.

The new Fergusson wharf goes east-west, or parallel to the city shoreline, so is less contentious. This project has a total value of $50 million including the pavement and services works required to connect to the structure and is expected to take 18 months to complete. It will be 300 metres long and 33 metres wide, or big enough to handle one large container ship.

Ports of Auckland has contracted Brian Perry Civil to build the wharf and its subcontractor, Heron Construction, to build the sub-sea infrastructure, which involves preparing the sub-sea reclamation slope with mud-crete and protecting it from tides, waves and container ship wash with rock armour placed on the revetment/batter. A six-metre ‘toe trench’ at the bottom of the reclamation slope also has to be dug out to ‘gravity anchor’ and restrain the sloping wall of rock.

The search for gear

Greg Kroef, the managing direct of Heron Construction, says he went looking for a suitable machine for the job and found it working in Panama for a Belgian mining company. He couldn’t believe his luck, because not only was the Liebherr R9250 going for a good price, it also came with an extra-long arm (never used) ideal for the dredging work on the wharf project.

“When that work is finished we have an older Liebherr machine working in Melbourne’s harbour that needs replacing. So we will take this machine off its tracks and ship it over there to replace it,” says Greg.

The machine arrived in Auckland in many parts.

It took over three months to put it together, including fitting the new arm and reconditioning some of the hydraulics.

Rather than using the traditional open hydraulic circuit on its arm, the R9250 uses a closed-loop swing circuit to enable maximum swing torque while retaining the full oil flow for the working circuit. The independent swing circuit in combination with the powerful drive system leads to very fast arm motion for something of this size.

The re-assembly of the excavator required so much room that it had to take place at the end of Bledisloe Terminal close to where the cargo ship discharged its consignment of excavator parts. Specialists from Liebherr were involved.

The problem now was that the assembly site was about 2.5 kilometres away from the project site. The excavator was ready by the end of March and Tranzcarr Heavy Haulage was engaged to move it to the construction site. The Auckland-based company used a 20-axle Goldhofer (UT) platform trailer to move the excavator to the end of Fergusson Wharf. The trailer was slipped under the machine, which was lifted up so it straddled the trailer in its middle. Three trucks were on standby for the hauling exercise but, in the end, it was completed by a single Kenworth.

The basalt rocks used on the new terminal project are quarried by Puhipuhi Rock & Metal Supplies in Whangarei, average 2.5 tonnes each and will be placed in a three-metre thick layer on the revetment slope. The boulders are being transported to the old Whangarei Port on the Hatea River and then barged to Auckland. Each barge carries around 1200 tonnes of rock and the project will use about 60,000 tonnes in total.

The 250 tonne excavator sits out over the harbour on some of the 300 piles already driven into position (to a depth of 40 metres), lifts the rocks off the barge and positions them very accurately underwater through a GPS system on the boom. A layer of smaller underlayer rock is placed first with the large rocks placed individually on top with an orange peel grab.

A screen in the excavator also allows the driver to ‘see’ what’s happening underwater. The spacious cab on this excavator is mounted on silent blocks, which reduces vibrations and limits noise. The cab also has a panoramic view over the entire machine and loading spot.

Which makes you wonder just how they built the original Auckland wharves and reclamation in the mid-19th century with the technology of the day?

Contrafed PUblishingMay 25, 2020
May 25, 2020
The Hamilton section of the Waikato Expressway is the final stretch to be...