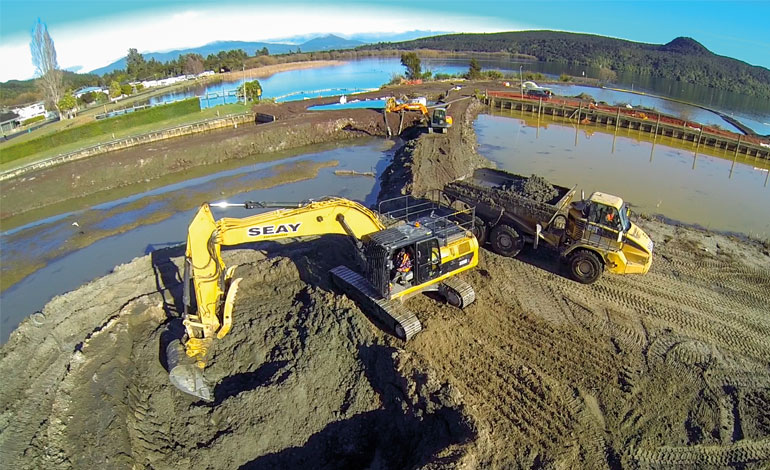 Auckland might seem far away to a business based in Taupo, but four-laning has brought it well within reach. Hugh de Lacy explains.

EARTHMOVING AND QUARRYING comprise the two otherwise separate businesses run out of Taupo by Seay brothers Graham and Bruce, but while the dozers and excavators operate around the central North Island, the quarry’s sending frequent truck and trailer loads of scoria daily up to Auckland.

It’s this red rock that the Auckland market needs, especially since the city’s volcanic quarries at the likes of Mount Wellington have long since depleted their supply to Auckland’s rapid growth.

There are a couple of other red scoria rescources left, but with nearly 40 years to run on their 50 hectare quarry in Taupo, the Seay brothers have the Auckland market comfortably in their sights.

And what’s hauling down the cost of trucking to Auckland is the four-laning of SH1 that now stretches as far south as Karapiro, on Taupo’s doorstep – or it will do when the by-pass projects round Huntly and Hamilton, currently under way, are completed.

That’s going to cut the truck journey time between Taupo and central Auckland by nearly an hour, and Bruce Seay says this will add to efficiencies of supply.

Taupo Scoria, as the quarry operation is named, was acquired by the Seays in 2004 from the Byford family transport business down the road in Taihape. As well as the sought-after red scoria it supplies all types of road and construction aggregates throughout the central North Island.

The red scoria, a premium drainage material, occurs in a layer above the main basalt rock base, a fair chunk of which ends up in roading projects and the concrete construction sector run by the sister company, Seay Earthmovers.

Of the quarry’s output, about 60 percent is red scoria with the rest being various forms of construction material.

Earthmoving was what the company was founded on by Hartley Seay in Auckland in 1978 with his sons Graham and Bruce involved from the start.

It quickly found its core market was the Taupo region, which prompted the move to Taupo about 40 years ago. In recent times Bruce has moved back to Auckland specifically to market the company’s quarry products.

Today the earthmoving company employs more than 30 people and the quarry has a staff of eight and, according to the Seays, both are earning ‘robustly’.

Over its lifetime Seay Earthmovers has been involved in a huge range of projects, from roading, landfills, sub-divisions and forestry contracts to hydro-electric schemes, steam field and geothermal power developments.

The company’s most recent project was the Motuoapa Marina right at their back door on the Lake Taupo waterfront. The project also marked the company’s 40th anniversary by winning the Supreme award at the Civil Contractors’ Waikato Construction Awards ceremony at Wintec University back in April this year.

The essence of this project was to widen and deepen the existing marina which is about 300 metres long by about 200 metres wide, and involved removing a large island in the middle to make way for more pleasure-boat berths.

The potential for spoil run-off contamination into the lake was obvious, but what made the project an award-winner was that the Seays chose to block and seal the marina entrance and pump most of the water out while the excavation was under way, a process that was preceded by the building of a causeway to the island.

The alternative to blocking the entrance with rock-fill from the quarry was to work from the banks using drag-lines or a dredge, which could have resulted in excessive sediment escaping into the lake.

More than 400 metres of Chinese-made permanent sheet piling was installed.

This was sourced by Graham Seay through a Chinese company with which he has separate associations, and which over the years has supplied the company with the likes of excavator attachments and quarrying materials.

It took a week to pump the marina out to a depth of less than a metre while the excavators and trucks started digging out the island.

With the water level low enough, the 30-tonne excavators were able to clear away the last of the island and to lower the level of the marina bed.

A floating silt curtain was installed when the marina was closed off to mitigate the potential for silt and pumice to contaminate the lake.

A total of 45,000 cubic metres of material was excavated over a 12-month period, most of it used to form adjacent car-parking and other amenities.

The project, which cost about $4 million, won the $1m to $14m category at the Waikato Construction Awards, on its way to also winning the Supreme award.

This accolade Bruce Seay credits to the company’s staff: “From our senior executive office administration and site managers to our highly skilled operators.

“They’ve been the essence of our success over the years.”

The two Seay companies boast one of the largest Caterpillar machinery operations in the central North Island, having had a close relationship with the Gough Group over the past 40 years.

The latest piece of Cat equipment bought by the company is a 323F series fully automated grade control excavator.

It’s an investment which, combined with the steadily-declining travel time between Taupo and Auckland, the Seays believe will help secure future business as the region faces a continuing housing shortage and massive government investment in infrastructure.

This article was first published in the August 2018 issue of Contractor Magazine.