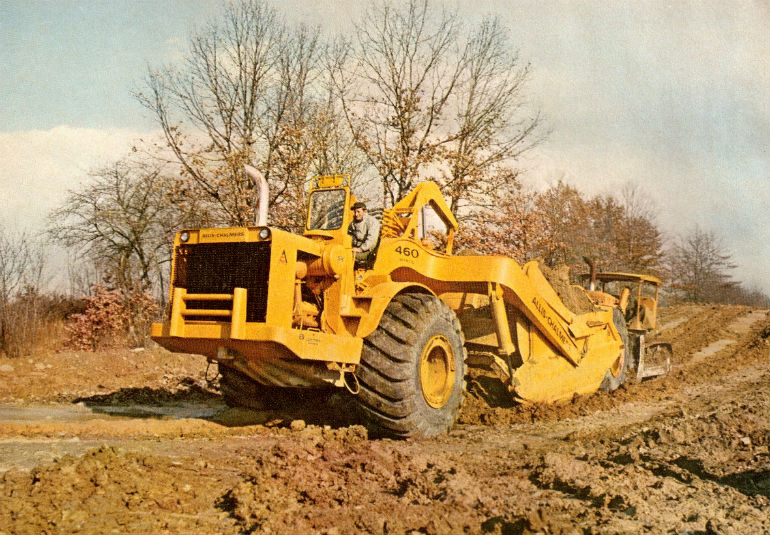 Allis-Chalmers was always an innovator when it came to construction equipment although not all of its products were instant successes, its TS-460 motor scraper being a very good case in point. By RICHARD CAMPBELL.

Allis-Chalmers entered the motor scraper market with the acquisition of Cedar Rapids, Iowa manufacturer, LaPlant-Choate in 1952.

LaPlant-Choate was one of several companies that A-C bought out in the early 1950s, company takeovers being preferred to spending vast amounts of capital on research & development costs. Why re-invent the wheel when it already exists!

Having said that, A-C was also not afraid to invest in its new acquisitions to further improve existing product and thereby enhance its own position in the earthmoving market.

LaPlant was a respected builder of motor scrapers, and one of only four manufacturers in the USA offering them immediately post-WWII (the others being LeTourneau, Heil and Wooldridge).

At the time of the A-C takeover LaPlant-Choate had two successful machines in its lineup, the nine cubic yard T200 and the 15 cubic yard T300.

Both of these machines were re-badged and re-marketed by Allis-Chalmers.

The major shortcoming of the LaPlant designs was the inability to steer more than 45 degrees to either side of centre, meaning the machines were not all that manoeuvrable and required a lot of room to turn.

All the competition were capable of 60 degree turns or better.

Allis-Chalmers redesigned the tractor units of both scrapers to address the problem but didn’t touch the bowl assemblies and the end result was the “new” TS260 and TS360.

At the end of the 1950s the market trend was going toward larger motor scrapers with capacities in excess of 20 cubic yards struck.

As Allis-Chalmers’ existing range of machines did not meet the new capacities being requested, some serious R&D money had to be invested in designing an all new machine, culminating in the Model TS460.

Now, the TS460 was a brute of a machine, and the largest motor scraper that Allis-Chalmers had ever built up to that time.

While it did bear a family resemblance to the existing TS260 and TS360 it was purely cosmetic as the TS460 was a completely new machine from the ground up.

With all-hydraulic bowl and ejector and a hydraulically operated cable apron, the TS460 certainly looked the part.

The competition had not been sitting around idly either as Caterpillar, Euclid, International-Harvester and Michigan all had new machines ready to go.

In order to gain some early market penetration, the first production examples of the TS460 were hurriedly introduced in 1962 and were powered by a 387 flywheel horsepower Allis-Chalmers model 21000H turbocharged and aftercooled diesel, mated to a Twin-Disc five-speed powershift transmission.

Unfortunately for Allis-Chalmers, all this haste and not enough testing uncovered a couple of rather serious flaws in the machine.

The first was the engine. At the upper limit of the 21000 engines designed horsepower rating, broken crankshafts, pistons through the sides of blocks and exploded turbochargers were the result.

Many engines were replaced under warranty only to fail again soon after re-installation!

The second problem was structural, with cracks in the tractor’s mainframe and bowl. All those problems cost Allis-Chalmers a lot of money and lost reputation, so the type was withdrawn early in 1965, being replaced by the hastily re-engineered model TS460B.

Allis-Chalmers was forced to adapt and fit a de-rated type 25000 engine (the largest it made at the time) to the 460B.

At the time, the A-C 25000 engine was only rated to 330 flywheel horsepower for mobile vehicle use.

With a de-rated engine, suitably reinforced frame, and a cubic yard added to the bowl, some alterations were also made to the apron, replacing the previous cable connection with a solid link arm (similar to Caterpillar and Wabco).

The TS460B was introduced to the marketplace in mid-1965.

While these fixes did substantially reduce the number of failures and improved operation, they also created another problem – with an empty weight now at almost 40 tons, the machine was seriously under powered for the weight it was expected to carry.

Needless to say, sales of the machine were hardly brisk but it did sell, mainly to contractors that already owned fleets of Allis-Chalmers equipment.

Allis-Chalmers also dropped the “TS” from all motor scraper designations during this time so the TS460B became simply the 460B.

While the 460B was entering service, it was pretty clear to Allis-Chalmers that the machine was only a stopgap and that further R&D money would have to be spent to turn the 460 into a trusted and reliable machine.

As A-C did not have another suitably high-powered engine, it turned to General Motors and fitted a 422 flywheel horsepower 12V-71N engine to the 460.

This worked just fine as the GM 12V-71 was a proven engine and put out ample horsepower.

Unfortunately it was too powerful for the existing twin-disc transmission and so an Allison six-speed powershift that better matched the torque curve of the 12V-71 was installed instead.

With its new powertrain, the entire tractor unit was given a makeover (as were other Allis-Chalmers motor scrapers of the period) and the type re-emerged as the model 460C in 1968.

Weighing over 43 tons empty, finally Allis-Chalmers had themselves a reliable, large motor scraper.

The 460C remained in production through the Fiat takeover of 1974, becoming the Fiat-Allis 460C, and was finally pulled from production in 1977 (along with a general downturn in the sales of large scrapers worldwide).

During the period of its manufacture, Allis-Chalmers built just over 2100 460s of all models, with the 460C being the most numerous.

While the similar sized Caterpillar, International and Euclid models all found homes on our shores, and despite being quoted to several customers, no Allis-Chalmers 460s were sold in New Zealand.

It gives me much pleasure to record that there is an accurate 1:50 scale model of the Allis-Chalmers TS460 available.

Manufactured by EMD Models and available through Buffalo Road Imports, USA, the model is well crafted and represents the initial production TS460 with a cable operated apron.

On the downside, the wheel hubs are a little too large and the model is expensive at US$395 plus postage.

However, it is the only model of a TS460 you are likely to see.

Kaikoura slips – the work so far

Arnold Bayliss: The king of airports