Construction of the Peka Peka to Otaki Expressway has reached a number of significant milestones over the past six months. Richard Silcock checks them out.

“With the dry weather we’ve had this season and with a reasonable winter and a good 2019/20 summer we can expect this progress to continue.

“In March we were able to move both north and south-bound SH1 traffic onto a new section of road which incorporates two new bridges that cross over the expressway alignment just north of Otaki.

“This road will eventually become a local road for traffic exiting the township of Otaki to the north, but at the moment it allows traffic to essentially pass-over the extensive construction work that is taking place to prepare the expressway alignment in this section.”

Over Easter a new 1.6 kilometre section of the main trunk railway line was brought into operation just north of Otaki in what has been described as a well-planned and executed operation.

“This new section of railway line replaces the old alignment and it is now around 85-metres to the west of where it used to be,” says Steve.

“Creating this new alignment was critical to the design as both it and the expressway alignment traverse a narrow section of ‘green fields’ land at this point. In constructing the new line the opportunity was also taken to increase the track’s curvature so that trains will be able to operate at a higher speed when negotiating the bend.

“It was a well-executed operation and all the parties involved, including NZTA (who are covering the cost), ourselves, KiwiRail and Siemens were able to accomplish the task as planned.

“Over Christmas we completed ground improvement preparatory work and carried out trials for lifting the old track. Since then we have laid the new track. This entailed the extraction of peat material, further ground improvement work, constructing the embankment and track foundations, and laying ballast. KiwiRail then laid the sleepers and the new track – all over a 12-week period. 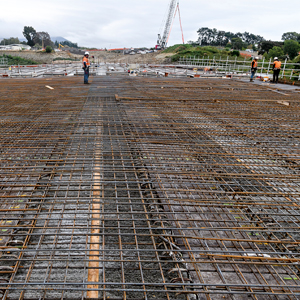 “Technically the most difficult part was the installation of the signalling infrastructure which was undertaken by Siemens and involved extensive testing, including technical compliance and line-of-sight trials.

“We are now in the process of removing both the old rail track and demolishing the old SH1 bridge over the railway line.”

Another milestone has been the completion in December last year of all the piles for the new, 330-metre long, four-lane, five-span bridge that crosses over the Otaki River.2

Steve says a total of 22 piles utilising bentonite have been bored up to a depth of 35 metres, all piles/columns completed and six of the nine crossheads built.

“The northern abutment is yet to be completed but we expect to have that in place by November this year. The pre-fabricated super-tee concrete bridge beams have been lifted into position over six spans and reinforced concrete decking has also been poured over three spans.

“We chose not to divert the course of the river at the site as originally planned and fortunately we have not had any major events of water flow during the critical construction period within the river channel.

“This is the longest bridge across the project and we expect to have it completed by the middle of next year.”

With the exception of a bridge which passes over a stream and the Otaki River Bridge, all of the other seven bridges being constructed sit on bank-seat abutments that are constructed on top of reinforced earth embankments.

A two-span, steel-box girder bridge at Te Horo will provide an east-west connection and carry local traffic to/from Te Horo Beach to the west and School Road to the SE. It will span the existing SH1, the railway line and the expressway but has yet to start construction.

Earthworks are progressing to plan with large cuts just south of the Otaki River, where it is predominately river gravel, and near where this expressway will join with the Kapiti Expressway at the southern end, where it is essentially sand. These works are expected to continue past the end of this autumn season and into the winter period.

As previously reported a good relationship with local communities and councils has been maintained by the project team, with six-weekly meetings held to discuss progress, road closures and any issues.

“The overall mood has been very positive,” says Steve.

The aggregate for the pavement construction is being supplied by both Winstone Aggregates (Otaki) and Rangitikei Aggregates (Manawatu).

While there has been an issue with some pavement failure on a section of the Kapiti Expressway and some other new road projects, which has resulted in remedial work being carried out, the Transport Agency and its consultants are looking to ensure the pavement specification for this expressway will meet the demands of traffic over its
25-year life expectancy.

Glen Prince, principal project manager with NZTA, says the agency has been looking carefully at the challenges being faced on the Kapiti Expressway and has drawn on industry expertise to build a durable pavement.

While the original completion date for the expressway was late next year, due to the additional requirement for a shared cycle/walk/bridle path, which was not part of the original design, this milestone is likely to be pushed out to mid-2021.

Meanwhile further north, Levin is experiencing an increase in traffic flows along SH1 which runs through the centre of the town’s CBD and many in the community including the local council are calling for urgency in constructing the recently announced bypass.3

In an announcement prior to Christmas, the NZTA unveiled its preferred alignment option for this bypass, which would run from Otaki to just north of Levin, to the east of the town.

However, no date for starting construction has been announced, although NZTA is now in the process of talking to potentially-affected property owners.

With the present government’s policy on minimal new road construction, it is Contractor’s belief that construction of the bypass may be some time away, and in the meantime extensive improvement and resurfacing work is being carried out along SH1 and SH57 just south of Levin.

1  This design and build project is being delivered in an 80/20 split joint-venture between Fletcher Construction and Higgins Contractors, with Brian Perry Civil providing the bridge piling and Goodman Contractors the bulk of the earthworks.

3 A local newspaper has reported an increase in traffic flow of between 20 and 25 percent though Levin, and both Levin and Otaki were gridlocked after the recent Eminem concert in Wellington. However NZTA say it was a one-off incident and that the paper did not use the figures supplied by them that indicated the traffic volume was comparable to peak travel periods on Fridays.

The real cost of a workplace injury