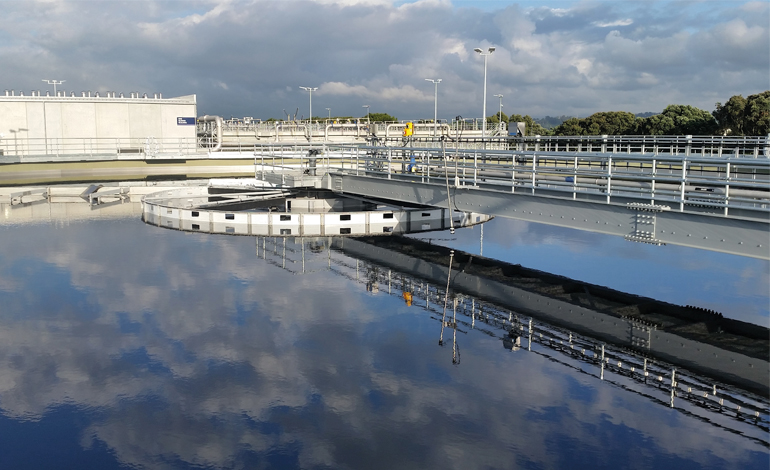 In south Auckland, the Mangere Wastewater Treatment Plant has recently been upgraded and the project has collected at least two major CCNZ Awards so far. By Mary Searle Bell.

Already the largest wastewater plant in the country, the Mangere Wastewater Treatment Plant has been expanded so it has the capacity to cope with the expected population growth in the city over the next 30 years.

The plant uses primary (mechanical), secondary (biological) and tertiary (filtration and ultraviolet radiation) methods to treat wastewater before it’s discharged into the Manukau and Waitemata Harbours. Central to the project has been the expansion of the biological nutrient removal (BNR) facility.

Earthworks began in late 2015, and were made challenging by the “horrendous” ground conditions. The coastal site meant peaty soil, and around 120,000 cubic metres of this had to be removed, and substantial haul roads also had to be installed. Making things more difficult, the ground was also highly inconsistent as it had previously been used as a rubbish dump.

The frequency with which water was encountered and the subsequent use of pumps and long hoses meant that the crew were unable to set up materials on site. However, even with the poor conditions, the earthworks completed on schedule with no issues.

To improve the ground, 2400 piles, up to 18 metres long and weighing up to 500 kilograms each, were driven into the soil to a top level of 5.5 metres below the current ground level, before the design-build elements could be constructed.

As the team explained in its Hirepool Construction Awards entry: “In a typical construction sequence, the excavation to the final level would be completed and then the piling crew would come through to install the piles, then backfill to the finished level. However, due to the poor ground conditions on the platform (black saturated peat and grey clays) the very real risk of a machine rollover or the semi-submergence of a crane required a different approach. Piling before excavation was adopted.

“As piling hammers are not designed to work under the ground, the team collaborated, presenting and vetting a variety of solutions. Ultimately, they fitted a pronged extension over the 150 UC steel piles to attach it to the vibratory hammer with ongoing refinements made over the course of the job.”

Next up was the construction of the design-build elements, plus all the associated above and below ground pipework.

“The new facility will increase Mangere’s BNR capacity as Auckland’s population grows by an estimated one million people over the next 30 years.”

The construction of the reactor alone demonstrates the level of complexity on the Mangere Wastewater Treatment upgrade. The reactor comprises two halves in one main structure, each side holding 28,000,000 litres. This capacity makes it one of the largest water retaining structures in the country.

“These heavy weight wall panels included a walkway and were placed over starter bars cast into the floor slabs. Incredible accuracy was required to ensure the 8700 starter bars were all in position. Jigs were used to ensure the starter bars aligned with the precast panel spacing. A 280-tonne crane dropped the reactor panels into place and a concrete stitch joined them together.”

“The drive was for resilient, watertight and quick to erect structures,” McConnell Dowell says. “The floors of the reactors and clarifiers were post tensioned slabs with the reactor floor poured in sections, each 1200 cubic metres.”

The floors were up to 400 mm thick and all graded to over 40 sumps. The use of post-tensioned floor slabs meant less reinforcing steel was required, making for much lighter structures.

The mechanical and electrical fit out was significant and took 11 months to complete. It included over 2.5 kilometres of handrail, hundreds of metres of 25mm to 600mm stainless steel pipe, 35 motors, 11,500 diffusers and 92 kilometres of cable.

Another challenge to the project was the installation of the twin secondary effluent pipes under Greenwood Road. The pipejacking method used required precision in execution due to a whole manner of services already present underground, including the main fuel pipeline from Marsden Point to Auckland/Auckland Airport, 11kV power cables, a high pressure gas main, water and telephone lines, running along the alignment.

The project also included the construction of a new road linking Ascot Road and Puketutu Island, and an embankment that will shield the plant’s neighbours from the facility. The embankment also provides a pathway between the Watercare Coastal Walkway and the Greenwood Road Park and has been enhanced by the planting of around 100,000 native plants over some 10 hectares of constructed landform.

The commissioning phase of the project was completed in March 2018 after six months of testing.

Watercare BNR project manager Sven Harlos has overseen the design and construction: “The new facility will increase Mangere’s BNR capacity as Auckland’s population grows by an estimated one million people over the next 30 years. It’s hugely satisfying to see the plant up and running, I’m enormously proud of all the work Watercare staff and our contractors have put into it.”

The plant’s increased capacity will ensure the highest quality treated wastewater continues to be discharged to the Manukau Harbour, even during heavy rainfall.

This is one of many major infrastructure projects Watercare will deliver to accommodate Auckland’s continued growth.

The BNR project forms part of the $4.9 billion capital infrastructure investment forecast during the next 10 years.

Tight site and a tight frame