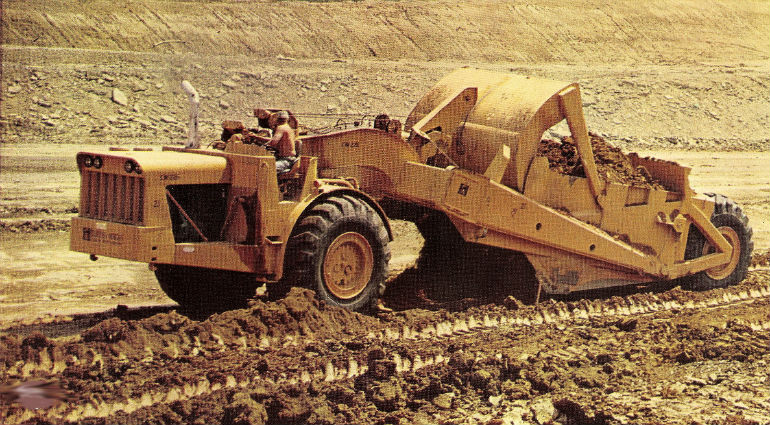 A company far better known for its aircraft such as the legendary Jenny, Kittyhawk, Tomahawk and Helldiver, plus a very successful line of aircraft engines, Curtiss-Wright also briefly had an earthmoving division. By RICHARD CAMPBELL.

Curtiss-Wright entered the earthmoving business through the acquisition of the Wooldridge Corporation, of Sunnyvale, California.
At the time of the buy-up, Wooldridge were a division of Continental Copper & Steel, and CC&S were keen to dispose of this particular part of their business.
The deal was sealed in June 1958 for approx. US$5m and Curtiss-Wright became an instant member of the earthmoving industry.

Wooldridge had been one of the very early pioneers in the manufacture of earthmoving equipment and could trace it’s ancestry well back into the early 1900s when Mack Wooldridge set up the company.

Wooldridge’s prime products were motor scrapers and towed scrapers although the company had also manufactured dozer blades, rippers and cable controls plus a small number of rear dumps.
There were five models of motor scraper, six models of towed scraper and three models of rear dump (which utilized motor scraper tractor units).
Wooldridge also had a manufacturing deal with M.R.S. (Mississippi Road Supply) whereby Wooldridge supplied them with scraper bowls for their four wheeled prime movers.
Curtiss-Wright cancelled this agreement not long after taking over leaving M.R.S. a little in the lurch..

All of the finished Wooldridge machines, patterns, jigs and equipment were uplifted from Sunnyvale and shifted to South Bend, Indiana where Curtiss-Wright had a large manufacturing facility.
Existing stock was re-decalled with the C-W logo and it was back to business as usual!

Curtiss-Wright chose not to continue the Wooldridge dozer blades, and rippers so these were immediately discontinued.
Wooldridge’s cable control units however, were an integral part of their motor scrapers, so this line was retained.

Curtiss-Wright appear to have made very few improvements or alterations to the existing Wooldridge product range. Cable control was, by the beginning of the 1960s, rapidly becoming “old” technology in favour of hydraulics.
To compound matters further, not a great deal of effort was put into promotional advertising (which is why information on the product is so hard to come by these days).
Mention the name Curtiss-Wright earthmovers to someone today and they will just give you a blank stare.

Apparently not knowing what to do with their new baby, and unwilling (or unable) to invest sizeable amounts of cash in modernizing or improving the product range, Curtiss-Wright made the decision to exit the earthmoving business just as quickly as it had arrived, closing down the South Bend production line in 1963, only five years after acquiring Wooldridge.

Smallest member of the range was the CW-27.
This originally started life in 1955 as the Wooldridge T-70 ‘Cobrette’ and was re-introduced in 1958 as the CW-27.
Rated at 7.5 cubic yards struck capacity, the CW-27 was powered by a GM 4-71 diesel.
Probably the only machine that Curtiss-Wright invested any money in upgrading, the bowl’s capacity was slightly increased to 8.2 cubic yards struck and the horsepower raised from 143 to 148 flywheel horsepower with the machine being re-launched in 1959 as the CW-28.
Although the machine had a Fuller five-speed manual transmission, it also had a torque converter giving it good lugging capabilities.
Weighing just over 14½ tons empty, the CW-28 featured all-cable operation, roll-out ejection and “Roto-Gear” steering (of which more later).
A push plate was fitted to the front of the machine so that it could assist other scrapers of similar size loading.

Probably the most popular of all the Curtiss-Wright scrapers was the model CW-215.
With a capacity of 15 cubic yards struck, it was a useful size for both large and small projects and Curtiss-Wright sold quite a few of them.
Powered by a 240 horsepower Cummins HRS-6 diesel engine, the CW-215 had a ten-speed Fuller 10F1220 manual transmission and could attain a top speed of 31 mph.
To assist the operator, the cable control system had an air booster.
A parallel development of the CW-215 was the CWD-214 which featured a 21 cubic yard rear dump.
The CW-215 weighed around 27 tons empty.

Just slightly larger than the CW-215, the CW-220 held 20 cubic yards struck and was powered by a turbocharged GM 6-110T diesel engine with an output of 375 Horsepower.
This was a very powerful scraper for the time period and featured an Allison CLBT5840 four-speed powershift transmission with an integral retarder.
As well as the trailed scraper, the CW-220 was also available with a 31 cubic yard rear dump.
In this form it was known as the CW-221.
Neither the CW-220 or CWD-221 sold in any great quantities.

The largest motor scraper offered by Curtiss-Wright, the CW-226 had a 26 cubic yard struck, 36 cubic yard heaped bowl, all cable controlled.
Weighing over 42 tons empty, the CW-226 was powered by the same GM 6-110T engine and Allison transmission combination that was fitted to the CW-220.
Designed for the largest jobs, the CW-226 enjoyed some sales into South American opencast mines.
A rear dump version of this machine was never produced.

Owing its origins back to the Wooldridge T4-200 ‘Cobra-Quad’ of 1955, the CW-320 was the only three-axle motor scraper produced by Curtiss-Wright and was a contemporary of the Caterpillar DW20.
Powered by a 300 horsepower turbocharged Cummins NRT-6 diesel, the machine featured a torque converter and a nine-speed Fuller R1150 manual transmission.
With a bowl holding 20 cubic yards struck and 27 cubic yards heaped, the CW-320 was a fast machine designed for relatively flat haul roads and had a maximum speed of 32 mph – and all of this with a roller chain final drive!
A 31 cubic yard rear dump version was also manufactured featuring the same tractor unit and known as the CWD-321.

This was a Cutiss-Wright exclusive and was operated by two rotary hydraulic motors with gears that acted on the machines king post when the steering valve was opened.
It was standard equipment on all of Curtiss-Wright’s two-axle scrapers.
A little bit ahead of its time, the system was prone to failures and wore quite quickly leaving the owner with an expensive repair bill.
Also, steering speed was governed by how high the engine was revving at the time which could make response times slow.
A great many machines had their Roto-Gear systems removed and replaced by more conventional hydraulic cylinders and linkage, thus curing the problem.

Cory-Wright & Salmon were the New Zealand distributor for Curtiss-Wright and they imported a total of four machines – three CW-28’s and one CW-215.
All of these machines ended up with NZ Roadmakers at one stage or another and the bowl of one of the CW-28’s still exists as a towed scraper.
The CW-215 was used in the construction of Mangere Airport and the Alcan aluminium plant in Wiri while the CW-28’s saw service all over the upper North Island including the Auckland Motorway system.

Exceedingly slim pickings here as there is only one model of a Curtiss-Wright machine that has ever been offered.
This is the Matchbox (Lesney) model K-7 which represents a CWD-321 rear dump.
It is an accurate representation of the original but in a rather un-collectable scale of around 1:110 making it a curio as it won’t fit into a collection of 1:50 or 1:87 scale models comfortably.
Mint & boxed examples are easy enough to find and not too horribly expensive.
The best place to find one is Ebay-UK

The scrapers of Curtiss-Wright