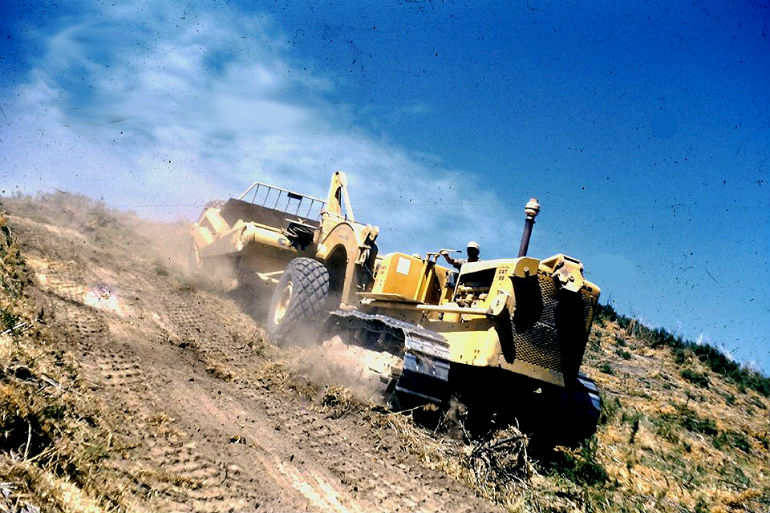 For over 30 years, Caterpillars towed scrapers were a mainstay of most contractors’ earthmoving fleets. As a one man tool, they could cut spread and compact without the need for extra equipment. By RICHARD CAMPBELL

During 1944, Caterpillar faced a big challenge.

Following a major disagreement with LeTourneau regarding the construction and marketing of his new Tournapull motor scraper, Caterpillar had dissolved the supply agreement they had with R.G.LeTourneau for the manufacture of dozer blades, PCU’s, rippers and towed scrapers.

This of course, left a major hole in the supply chain as more than 60% of Caterpillar track type tractors of the period were supplied with LeTourneau attachments.

Caterpillar also had a supply agreement with LaPlant-Choate, a pioneer company in the development of hydraulically controlled attachments, but the LeTourneau attachments were preferred because of their simplicity, reliability, and LeTourneau’s larger manufacturing facilities which were just across the Illinois River in Peoria.

So it was off to the drawing board for Caterpillar engineers.

It has to be said that Caterpillar did a remarkably good job of designing and putting their first scraper, the No.70, into production so quickly.

It was a very modern and clean design, with no overhead structures to limit loading by shovels if necessary, and with very well thought out cable runs.

The rear stub axle could be adjusted for odd or different sizes or brands of tyre and the cutting edge had a bell shape which loaded aggressively, especially in clay.

This particular feature was copied from LaPlant-Choate who used a similar cutting edge.

These scrapers were very well received by contractors and sold very well.

During 1947, the next scraper off the production line was the No.60.

Intended for D6-sized machines, the No.60 was a carbon copy of the previous two scrapers only smaller, and held 6 cubic yards struck and 8 cubic yards heaped.

Spurred on by their success, Caterpillar then turned their design team loose on a scraper for their D4 tractor, the end result being the No.40 which first appeared in 1949.

Now the No.40 was quite a departure from the previous three scrapers as it featured hydraulic control which was more suited to the D4, and it had a conventional flat bowl floor and cutting edge.

Demand for the No.40 from export customers was so great that Caterpillar set up licence manufacture of the model in several countries.

The No.40 was built in France by Corpet-Louvet, in South Africa by Wright, in Australia by Steelweld and in the UK by Birtley.

Despite the large number of sales of these first Caterpillar scrapers, there were a few problems too.

The bell-shaped cutting edge of the No.60, No.70 and No.80 could not be used for finishing work, a special edge had to be fitted to carry out this task, a time wasting exercise if ever there was.

It was back to the drawing board for some much needed revisions.

First to receive the new modifications was the No.80 which was re-released in 1950 with a flat bowl floor, 3-piece adjustable drop center cutting edge and outside supported rear axles.

This was followed in 1951 by the revised No.60 and No.70 scrapers who also received larger capacities.

An all new scraper was also added to the range for those contractors with a need for real bulk earthmoving, the No.90.

This was a really big towed scraper holding 21 cubic yards struck and 27 cubic yards heaped and, unlike the other models in the towed scraper range, was intended from the outset to be push loaded for maximum effectiveness.

During the mid-1950s, Caterpillar engineers had been carefully studying ideal bowl profiles and configurations for easier, faster loading and had spent considerable time and money on the project, even investing on an in-house soil bin to test prototype models.

This resulted in the new “Low-Bowl” range which began to appear in 1955.

In order to differentiate between the new ‘low-bowl’ models and the previous range, a whole new number series was issued to identify them.

The No.40 was not modified (it didn’t need to be) and the No.60 for whatever reason kept it’s designation.

As was to be expected, the newly designed bowls held more earth so capacities of all the new ‘400 series’ were greater than their predecessors.

Various small improvements were made over the years to the 400 series scrapers with new sub-types coming out every couple of years.

Towed scrapers began to fall out of favour in the late 1960s.

The first to go out of production was the No.40 which was discontinued in 1959.

Fortunately, this is not the end of the Caterpillar towed scraper story.

After a period of time, it was gradually realized that the towed scraper was still an extremely viable form of moving earth cheaply.

Due to their well thought out and rugged design, surviving examples of old Caterpillar towed scrapers are sought for conversion to hydraulic operation as they are so adaptable.

This will likely see examples serve well into the late 21st century.

It is easy to tell the difference between an early build and later build Caterpillar towed scraper without having to have a look at the cutting edge (which has probably been modified by this stage anyhow).

Older units have a large enclosed apron sheave tower and no outside supports on the rear axle.

All of these early scrapers were manufactured in the USA.

Production of the post-1950 examples of the No.60, No.70 and No.80 was undertaken by Birtley in the UK and examples exported worldwide.

Caterpillar USA absorbed Birtley around 1957 and from then on the UK manufactured examples wore Caterpillar badging.

UK built examples of the No.435 and No.463 have completely different rear push blocks to their American cousins for easier push loading.

Apart from the No.90 and No.491, every one of the towed Caterpillar scraper range has been imported into New Zealand in quantity.

This also includes examples which were manufactured outside of the USA, especially those from Birtley in the UK.

Many of these old scrapers are still earning their keep, almost 70 years in some cases, since they were manufactured.

Well you are in luck here as several Caterpillar towed scraper models have been issued over the years. Some are a bit scarce but most are available if you keep an eye on Ebay.

The No.40 – Manufactured to 1:16 scale by Gilson-Reicke, a beautiful model to an odd scale and ridiculously expensive. Buy only if you must.

No.60 – Your author is unaware of any scale models representing the No.60.

One represents the early unsupported axle No.70 and was offered by Cruver in the 1950s. It is plastic, accurate and fairly basic, but had really good tyres. If you can find one and spend some time detailing it you will be rewarded with a very nice model.

The other is a very expensive diecast, and not entirely accurate version of the later No.70 with outside supported rear axles and was manufactured by Reuhl.

Everything works on this model but dumb prices keep it out of most collections.