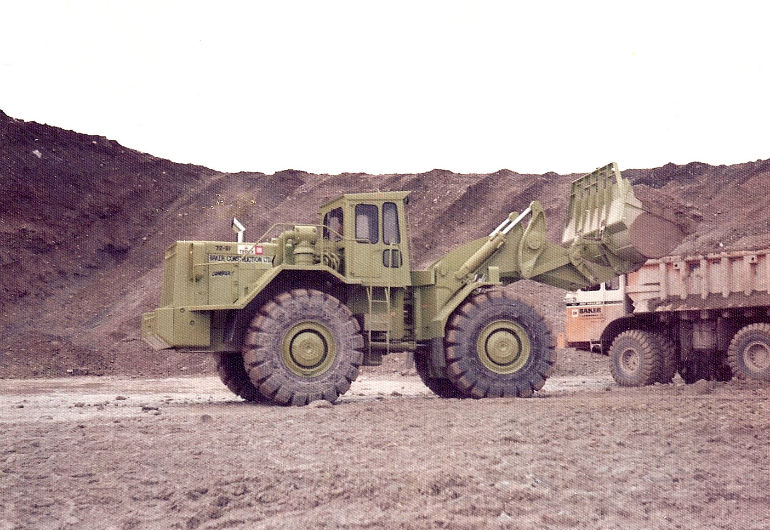 Following on from the success of its smaller 72 series wheel loaders, Terex decided to take on the big boys with the 72-81. By Richard Campbell

Euclid had begun preparatory designs on a big wheel loader as far back as 1965.

Several experimental machines were built between 1966 and 1967 powered by the naturally aspirated GM 8V-71 and the turbocharged GM 8V-71T but during testing didn’t quite meet up to the expectations of the designers as the machines were either too slow or lacked sufficient power for operating functions.

A revision to one of the later designs introduced the turbocharged GM 12V-71 engine into the mix and Euclid suddenly had itself a performer.

A small batch of trial machines was constructed to be field tested in various customer applications and GM’s Milford proving ground.

These were known by the factory as the Euclid model L-X.

Following successful trials, Euclid intended to put the new wheel loader into full production as the model 72-80, but following GM’s renaming of the Euclid earthmoving division to Terex in 1968, the decision was made to keep the designation all in the “1” family and the 72-80 became the 72-81.

It was intended for opencast mining, bulk stockpiling and large earthmoving projects.

The new 72-81 wheel loader was officially introduced to the public in February 1969.

It was faced with some stiff opposition from competitors in the form of the Caterpillar 992, International-Hough H400 and Clark-Michigan 475.

Weighing in at around 52 tons, the 72-81 boasted a 438 flywheel horsepower GM12V-71T engine mated to an Allison CRT6033 3-speed transmission and could be outfitted with either a nine or 10 cubic yard bucket.

During 1975, the machine was modified somewhat receiving the newer Allison CRT7033 3-speed transmission and also having the engine derated to 434 flywheel horsepower.

It had been intended to upgrade the machine to a 72-81B series, like its slightly smaller sibling, the 72-71, however this never occurred either due to lack of funds or a decreasing market share.

The machine remained in production until 1982 when it was replaced by the totally redesigned but smaller Terex Model 90C.

Manufactured only in Terex/GM’s Hudson, Ohio plant, the 72-81 was exported worldwide with total production amounting to approximately 450 units.

The 72-81 remains the largest loader ever manufactured by Euclid/Terex.

Of conventional articulated design, the Terex 72-81 was powered by a General Motors, Detroit Diesel 12V-71T rated at 434 flywheel horsepower.

This was connected to an Allison CRT7033 3-speed full powershift transmission and gave the 72-81 a top speed of 24 kilometres per hour for load and carry operations.

A no-spin element was standard equipment in the rear differential.

Shoe brakes were employed on all four wheels and these were fully air operated.

Although quite a few optional sizes were available, the standard tyre fitted was usually the 33.25 x 35 L4.

Capable of 40 degree turns to either side of centre, the steering was fully hydraulic and featured an emergency pump should the main pump fail.

The steering cylinders themselves were mounted low on the frame making them easily accessible for servicing.

At the business end of the machine was either a nine cubic yard rock bucket, or 10 cubic yard rehandling bucket.

Teeth could be installed as the owner saw fit.

An automatic bucket positioner was fitted as standard.

Unusually for a large wheel loader, the 72-81 had its tilt cylinders mounted outside of the loader arms (most manufacturers mounting them in between the loader arms).

Loader linkage was a modified Z-bar type with two crowd rods for a bit of extra leverage.

The machine’s frame was a very sturdy structure and amply protected all the working components.

A 3-section counterweight (which could be added to if necessary) was standard as was a particularly heavy duty cast steel radiator guard which also contributed to the counterweighting.

The operator was provided with quite a large cab which gave ample visibility in all directions.

This incidentally was the same cab fitted to the slightly smaller model 72-71 wheel loader.

Although not ROPS certified, a full ROPS cab was an optional extra along with heaters, demisters and an air conditioning package.

All the instruments and warning lights were set in a wide imitation wood grain dash panel directly in front of the operator.

Seat was a Milsco air suspension with a Bostrom full air ride offered as an option.

On the floor was the throttle pedal, main air brake pedal and the transmission disconnect pedal, which allowed full power to the hydraulics when loading from the pile.

Operating levers for the lift and bucket functions were set in a small console to the operator’s right and were air assisted.

Along with the ROPS cab, aircon and heater/demister mentioned earlier, you could also outfit your 72-81 with a reverse alarm, water ejector system for the air brakes, a tachometer, seat belt, tyres up to 33.25 x 35 L5, Kysor engine shutdown system and a cab ‘Soundpac’, which, seeing the 72-81 had a “buzzin’ dozen” in the engine compartment, was probably a highly useful accessory!

New Zealand Terex distributor Clyde Engineering imported two Terex 72-81 wheel loaders in the early 1970s. Both of these were sold to Baker Construction of Cambridge which employed them extensively on the Twizel and Clutha hydro projects.

It is not known if either survives.

Perhaps one of our readers could enlighten me.

Unfortunately it is very small, 1:120 scale to be exact, and is manufactured by Tomica of Japan and intended for railroad layouts.

There are regrettably no models of the Terex 72-81 available in any other scale which is a pity as the machine represents the pinnacle of what Terex was able to achieve at the time.

The small Tomica model is readily available from eBay for under US$30 and is rather cute if nothing else.

Models of Euclid/Terex machines of the 1950s to 1980s in general are very rare considering the amount of real product that Euclid/Terex sold throughout the world.

It is to be hoped that some enterprising manufacturer will fill this void in the near future.

Steering:          Hydraulic pivot steer with emergency backup; 40° to either side of centre