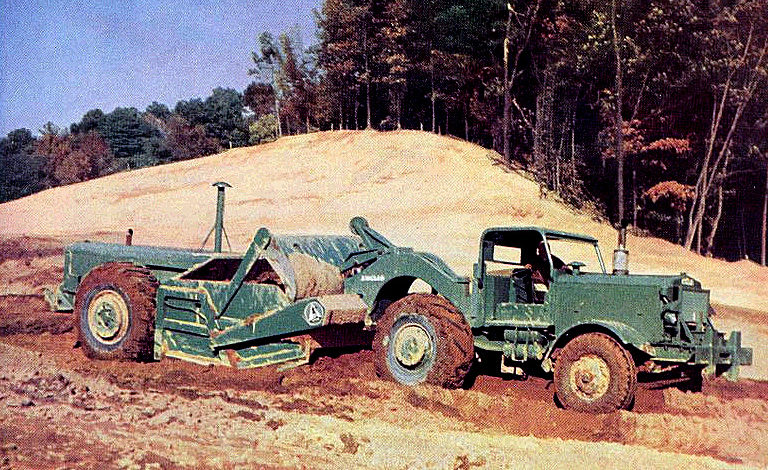 One of Euclid’s earliest twin powered scrapers, the Euclid 16TDT was a progressive development of that Company’s experiments with tandem powered earthmovers and it created quite a sensation in little old New Zealand. By RICHARD CAMPBELL

Following the Wheels at Wanaka machinery show held at Easter weekend, it seems highly prudent to examine one of the stars of the show, the Euclid 16TDT.

With a face only a mother could love, the Euclid 16TDT was a brute of a machine which was first introduced by the recently formed General Motors Euclid Division in 1953.

By rights, it should have been called the TSS-18 but Euclid hadn’t quite sorted their act out regarding model identification, and didn’t start naming it’s machines by struck bowl capacity until 1954 – eg: S-7, TS-14 etc.

Thus the machine was always known as the 16TDT (which referred to the model number, axle weight capacity and type of power used)

The 16TDT was GM powered and there was also an identical model 15TDT which was Cummins powered.

Some contractors preferred Cummins over GM, either way, Euclid always catered for both camps.

Euclid’s were the leading force in tandem powered earthmoving equipment and over the years produced twin powered dump trucks, track type tractors and of course, were literally, as their logo stated, “the pioneer” in twin powered scrapers.

The model 16TDT can trace it’s ancestry back to the model 50FDT three-axle bottom dump which was the first of Euclid’s three axle machines to feature twin powerplants.

As mentioned previously, the 16TDT was powered by two identical GM 6-71 diesel engines with Allison powershift transmissions, one in the tractor unit and the other in the scraper.

While the twin power & powershift concept was very innovative for the day, as were the planetary final drives in both driven axles, the rest of the machine was really quite conventional.

Chassis for the tractor unit was broadly based on the Company’s pre-existing range of rigid body haul trucks, only slightly shortened.

Where the dump body’s hoist cylinders would normally be fitted was occupied by a six inch diameter single-post universal hitch for the scraper.

The cab was exactly the same as used on the Company’s range of haulers with car-type doors and two windows cut into the rear so the operator could see the bowls cutting edge.

A bucket type seat with rudimentary suspension was provided for the operator with three bowl control levers set up like a vertical tree to his right.

All of this was attached to a very basic transmission shift quadrant, giving the machine three speeds forward and one reverse.

A comprehensive instrument display bisected the steering column, and on the floor were the two throttle pedals, an air brake pedal plus a very substantial handbrake lever (which was a dry disc type, acting on the dive shaft).

The cab did not usually contain a heater or defroster and was un-insulated and very noisy!

Although basically a stiff frame machine, the 16TDT did have front axle suspension consisting of two packs of large leaf springs.

A Vickers hydraulic steering booster came as standard, and this, coupled with the leaf springs, went some way to cushioning road shock through the steering wheel to the operator.

The model 23SH scraper followed standard Euclid construction practice, being of the lever action type with four identical single acting hydraulic cylinders used for all functions – two for the bowl, and one each for the apron and ejector.

A short length of cable attached the apron to its respective actuating lever while the bowl floor was curved and pivoted just behind the cutting edge.

Ejection was accomplished by the hydraulic cylinder pushing on a suspended lever with a roller on its end, rolling the load out, the floor returning to loading position by gravity when the hydraulic pressure was released.

Euclid used this system on their smaller scrapers for decades.

While Euclid did achieve some market penetration with the 15TDT and 16TDT, production of the 16TDT only lasted three years with a total of 107 being manufactured.

Its Cummins powered counterpart, the 15TDT, didn’t fare any better with only 44 being built.

Its replacement was the two-axle 29LOT series TS-18 which featured the same bowl as the 16TDT and, like the 16TDT, also had twin GM 6-71 engines.

The first six 16TDT’s were painted the standard Euclid colour of the period, “Armington Green”, a very dark sage green colour, and certainly not army olive drab as some may suggest.

The seventh and last machine delivered (to Feast & McJorrow) featured the new “Hi-Lite Green” which was a very pale lime-yellow colour.

Euclid used this color up until around 1964 when yet another green was introduced.

This was just called “Euclid Green” and was a much more vibrant mid-green colour which didn’t weather nearly so badly as Hi-Lite Green which tended to fade rapidly and go chalky under sunlight.

Clyde Engineering, the New Zealand distributor for GM-Euclid, imported seven Euclid 16TDT’s between 1953 and 1955 (the last year the machine was manufactured).

First delivery was to Dryden Construction of Auckland with the second machine going to NZ Roadmakers (also of Auckland) and subsequent deliveries (in no particular order) to Bitumix (Auckland), Issaac Construction (Canterbury), Evans Road Construction (Hawkes Bay), Feast & McJorrow (Masterton) and a further unit to Drydens along the way.

All of these machines racked up some very impressive performances and paved the way for the future acceptance of twin powered motor scrapers in New Zealand.

This machine (originally Feast & McJorrow’s) is unusual in being the only 16TDT imported with a single rear window cab.

As you have probably guessed, the model situation is dire, there being no models of the Euclid 16TDT in any scale.

Good models of Euclid equipment in general are very hard to come by, something to do with product licensing I believe.

If you’re handy at conversions, there is a 1:50 model of the 16TDT’s near relative, the SS-18, made by EMD models and available through Buffalo Road Imports, USA.

However, you will nave to manufacture a rear engine, extend the rear scraper chassis slightly and fit larger diameter rear tyres.

This should produce a passable 16TDT.