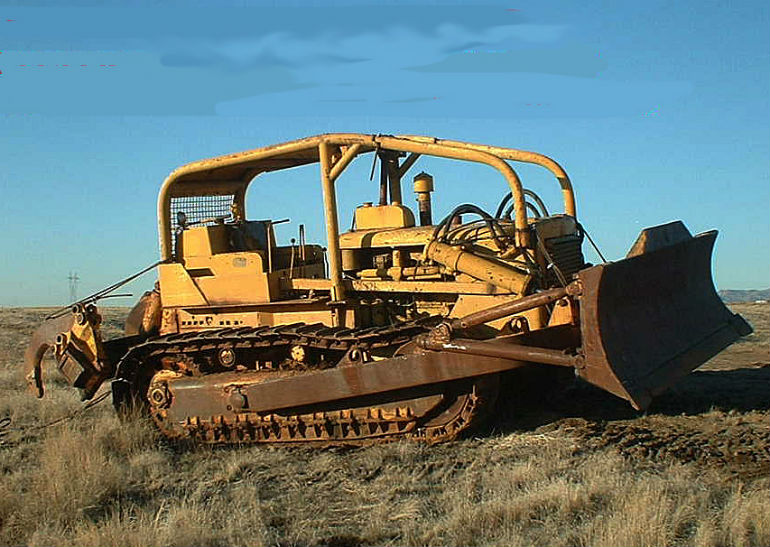 The end of World War Two saw a massive increase in the demand for heavy equipment. Top of contractors’ wish lists were large, high horsepower, track type tractors and Allis-Chalmers, Caterpillar and International-Harvester duked it out for top honours. By Richard Campbell.

Allis-Chalmers made a bid in the large tractor stakes when in early 1947 they introduced their model HD-19H track type tractor.

It is worth noting that the HD-19 was an all new design, and not a rework of their previous model HD-14C.

Caterpillar on the other hand had introduced their new D8-2U series in 1946.

The D8-2U was basically an updated version of the previous D8-8R and was not as big as Allis-Chalmers’ HD-19H.

International-Harvester had also been very busy developing a new tractor.

Wartime shortages and restrictions had put the brakes on any new product development but by 1945, with the end of the war in sight, development began on what was to become the new TD-24.

The TD-24 contained several new innovations for International including planetary power steering and an eight-speed synchromesh transmission – an industry first.

Several prototypes were built and everything seemed to work as it should so the directive was given to put the TD-24 into production immediately, especially since Allis-Chalmers had beaten them into the marketplace with a big tractor.

Not wanting to be upstaged by Allis-Chalmers, International-Harvester, with much hype, publicity and fanfare, introduced their new model TD-24 during the latter part of 1947, wresting the short-lived title of ‘worlds largest track type tractor’ from Allis-Chalmers.

Unfortunately for International, in their race to outdo Allis-Chalmers, there had been insufficient testing of some of the major new components and these oversights would come back to haunt the Company

For the record, the TD-24 was not a scaled-up version of the Companies previous model TD-18 (which remained in production), but a completely new tractor.

While also weighing around 20 tons bare, it was physically a little larger than the Allis HD-19H and its new six-cylinder I-H UD24 engine produced 180 horsepower.

International-Harvesters method of starting their large diesel engines turned out to be one of the TD-24’s major drawbacks.

Unlike other manufacturers, who used direct electric starting or a separate gasoline “pony” motor to start their diesel engines, International-Harvester took this concept a step further and turned their main diesel engine into a gasoline engine for easy starting, converting to diesel when it was properly warmed up!

This was accomplished by incorporating two complete sets of valves into the cylinder head with spark plugs and a hi/low compression control device along with a carburetor and distributor.

Also, International must have had some concerns over exhaust back pressure as the TD-24 always sported two exhaust pipes, one for each bank of three cylinders.

The overheating problem was eventually rectified by fitting a water header tank on top of the machine’s bonnet to ensure that a good supply of water was always available to the engine, even on slopes.

Next major problem was the new planetary steering system which gave all sorts of trouble with some machines failing within weeks of being delivered.

This reflected very badly on International who had been promoting this feature strongly.

Neither of these major issues could be fixed overnight and International were forced to shut down the TD-24 production line in early 1949 to instigate fixes to the problems.

Some particularly troublesome machines were bought back from their new owners and scrapped!

After considerable burning of the midnight oil, International were able to resolve most of the issues and production of the TD-24 was recommenced late in 1949, but a lot of damage had been done to International’s reputation.

In 1955, after some 7,500 of the first series TD-24 had been delivered, International came out with two new versions of the machine which was now known as the TD-24 241 series.

One was a direct drive model while the other featured a torque converter drive transmission.

International had by now ironed most of the bugs out of the TD-24 and the two new models, while not bullet proof, were a great improvement over the original TD-24.

A distinctive spotting feature of a TD-24 241 series, was the relocation of the air cleaner to the left hand side of the engine.

This shortened the air ducting required considerably and also gave the operator a larger floor area.

A radiator header tank was also a standard feature.

As for the race for the world’s largest tractor, International held the title until 1951 when Allis-Chalmers once again upstaged them with their HD-20.

Then in 1955 Caterpillar blew them both away when it introduced the first D9.

International did not manufacture their own ancillary attachments until after 1959.

The major supplier when it came to outfitting a TD-24 was Bucyrus-Erie who built everything from cable and hydraulic controls to dozer blades and scrapers.

International made quite a fuss about this partnership with B-E in their advertising calling it the “Big Red Team”.

In the forest, Carco supplied the bulk of the logging winches with Isaacson doing a lot of the cable operated dozer blades (Isaacson’s blade had a much higher lift than Bucyrus-Erie’s).

Although there are no accurate records left of imports, well over 200 International TD-24s were imported into New Zealand during the machines twelve year production run and served throughout the country in all kinds of service.

Several of the bigger contractors had fleets of them including well known names such as Dryden Construction, Earthmovers Waikato, Isaac Construction and NZ Roadmakers to mention just a few.

The TD-24 was a common sight on all the large NZ Government-funded earthworks of the 1950s & 1960s including airports and dams.

With the introduction of the TD-24’s replacement, the TD-25, TD-24s went into retirement quite quickly, the spectre of the machines continuing teething troubles no doubt hastening this process.

Fortunately, there are several in preservation.

For once, the model industry has seen fit to offer several models of International’s “big red”.

In 1/50 scale there are two offerings, one from Spec Cast and the other from EMD.

The Spec Cast offering is a little under-scale at around 1/55 although it is advertised as being 1/50. It can be had in four different versions, bare, with cable blade, with hydraulic blade and as a logger, complete with an Isaacson arch and front blade frame.

The EMD model is to the correct scale and can also be had in multiple versions but it is more expensive and considerably harder to find.

There are also 1/25 scale models of the TD-24 available, again by Spec Cast and another by Sherwood Models of Canada.

Once again Spec Cast’s model is under-scale at around 1/28 but it is very well done and doesn’t look too out of place in a 1/25 collection.

Note that ALL of the currently offered models represent the first production ‘TDE’ version with the air cleaner in front of the operator.

If you want a TD-24 241 series machine you will have to do some awkward modifications.

The battle of the buckets – 25th National Excavator Operator Competition