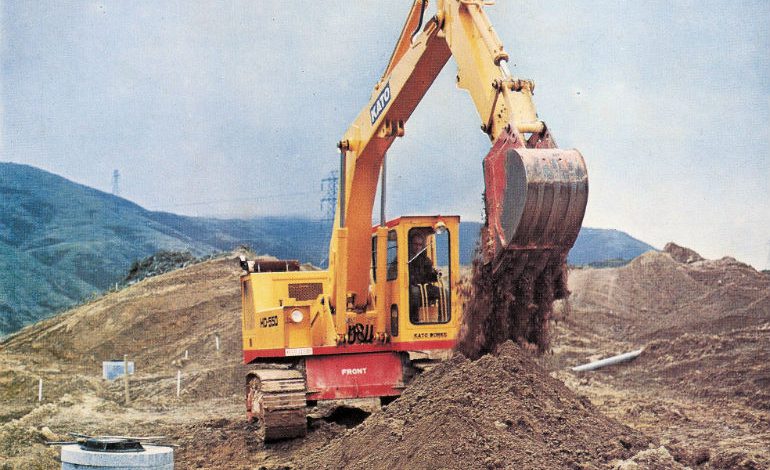 Well known for the quality of its mobile cranes, Kato, of Japan, was also a pioneer in the field of hydraulic excavators, and the second Japanese manufacturer to export them commercially. By RICHARD CAMPBELL.

A little bit of pre-history. For whatever reason, New Zealand was unusually slow in converting from cable to hydraulic excavators.

In actual fact, hydraulic excavators had been around since the 1950s when Demag, Koehring and Liebherr introduced their first machines to the construction marketplace.

Hydraulic excavators began to appear here in small quantities from the mid 1960s and the majority of these came from the UK in the form of Hy-Mac, Priestman, JCB and Massey-Fergusson.

There was also a smattering of machines from Europe including Poclain and Yumbo. Hy-Mac was the first to really market the hydraulic concept in New Zealand staging demonstrations around the country, impressing contractors with their ease and flexibility of operation compared to the cable-operated types.

But all of these early machines had their drawbacks, the most obvious being that they were basically all “mobile oil leaks” due to limitations in high pressure sealing technology and hydraulic hose manufacture which had not yet caught up with the times.

The first Asian designed and manufactured machines to reach New Zealand were built by Hitachi and began to appear in New Zealand in late 1966. At the time, there was a certain stigma to any goods “made in Japan” inferring that they were of sub-standard or poor quality.

In Hitachi’s case, this was simply just not true and those New Zealand contractors that bought the first UH03s imported were very pleasantly surprised by the machines’ toughness and reliability. The brand has thrived in New Zealand ever since.

Kato was the second Japanese manufactured excavator to appear here, arriving on the local NZ market in 1973. Kato Works was a very long established Japanese company having been founded in 1895, and specialising in steel fabrication, locomotives, mobile cranes and street sweepers. It began building excavators for the Japanese marketplace in 1967 with exports beginning the following year. Australia in particular was very fond of Kato excavators where at one point they held 40 percent market share in that country.

For the Japanese domestic market, Kato offered Isuzu or Mitsubishi engines, however, for exported machines the engines specified could be Perkins or GM Detroit Diesel, which suited Clyde Engineering perfectly as it was the NZ agent for both.

The first buyer of a Kato excavator was a Mr George Hart of GJ Hart & Sons, who bought a model HD550 and put it to work on the Kelson subdivision in the Western Hutt hills.

By the end of 1973 Clydes had sold 11 Kato excavators – really good going for a new product and one made in Japan to boot. One of the great beauties of the Kato excavator was its simplicity.

Mechanical linkages from the control levers opened and closed the valves allowing oil to flow to the appropriate cylinders – it was as simple as that.

Cylinder activation speed was directly affected by the engine’s throttle setting; the more revs you had the faster things went!

Throttle activation was via a Bowden cable attached to a control lever in the cab.

There were no computers to worry about as everything was analogue!

The interior of the Kato cab was very Spartan compared to excavators of the present day, with only the most necessary of items installed and little, if any, insulation.

Control levers were all long throw, aligned in a row in front of the operator.

Seating was usually a bench type with a heater installed beneath it for cold weather operation.

The front screen could be lifted up and stowed inside the cab to allow a better view of the work area or to permit airflow into the cab on a hot day, and the cab rear window could also be opened out for better ventilation.

Interior noise levels of these first-generation machines were in excess of 88dB so some kind of hearing protection was usually required.

Notably, Kato was one of the first earthmoving machines in New Zealand to offer an AM radio for the operator.

Hydraulic pumps were predominantly double gear commercial types although variable incidence types were beginning to appear on the later models.

A lot of the first generation Katos, including the model 350G, had chain drive to the sprockets like the older cable excavators of the day.

Despite all this austerity, the Katos got the job done well, day in and day out with little mechanical fuss and far less effort on the operator’s part, which naturally endeared them to many.

Unfortunately for the brand, with the demise of the dealer Clyde Engineering in the mid 1980s, Kato was left looking for a new home and lost its impetus somewhat.

The brand is still represented in New Zealand.

As mentioned previously, the first owner of a Kato excavator in New Zealand was GJ Hart & Sons.

Although there are no models of the very early Kato machines, there are two models available of Kato’s excavators.

This was first released in the mid 70s and is the closest you will get to an early representation.

Although it is an older model, it is accurate and quite appealing.

The other model is to 1:43 scale and is of a HD820. It is manufactured by Goodswave of China and is a simple, accurate model of a second-generation Kato excavator.

Although both models have been discontinued by their respective manufacturers, both are frequently available on eBay.