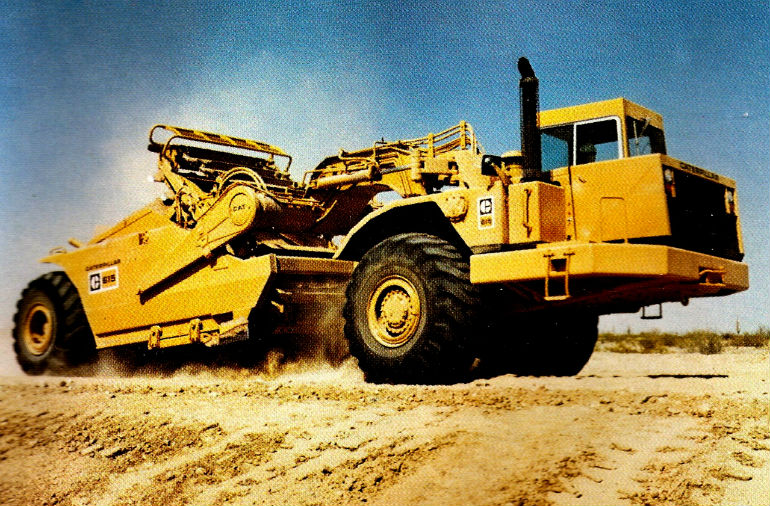 Filling a hole in the (then) lineup of Caterpillar elevating scrapers, the Caterpillar model 615 was a great little machine with some features unique to the Cat scraper product range. By RICHARD CAMPBELL

First introduced in 1981, the Caterpillar 615 elevating scraper came as a bit of a surprise to the earthmoving industry.

Designed and manufactured in conjunction with Johnson Manufacturing of Lubbock, Texas, (a Caterpillar subsidiary), it was the first all-new Caterpillar scraper in almost a decade.

Johnson, a competitor of Hancock, had lots of experience in building elevating scrapers and had been doing so since the mid 1950s.

They were already responsible for producing the entire Cat 613 plus the bowls for the former Caterpillar J619C and J621.

Johnson also manufactured tow-along elevating scrapers for agricultural use and had built bowls for both John Deere and International Harvester.

Their reputation was well-established.

The Caterpillar 613 had already proved itself as a good all around tool for both smaller and larger contractors who required a small, utility type scraper.

While the 613 was aimed at the smaller machine market, the new 615 was targeted at the mid-size to larger contractor who needed an effective machine to shift bulk dirt.

Add two or three together in a fleet and you had a real production tool.

After a testing period, the 615 was introduced in 1981, powered by a 250 horsepower Caterpillar 3306TA six-cylinder diesel.

A newly designed, six-speed powershift transmission was installed which permitted speeds up to 30 mph under favourable conditions.

The real surprise however, was the optional offer of axle suspension on the tractor unit, a first for Caterpillar who usually fitted a cushion hitch to their machines to reduce haul road ‘loping’.

This suspended axle was very similar in design to the type used by Michigan on their 110-15 elevating scraper and Terex on their larger TS-24B “Loadrunner” machines.

One has to speculate as to why Cat offered axle suspension on the 615 and not a cushion hitch and the author suspects it may have had a lot to do with keeping the weight down low.

Cushion hitches, and their necessary plumbing, are not light and on a smaller machine such as the 615, the addition of a cushion hitch may have raised the centre of gravity of the machine too high making it unstable.

The suspended axle, which added an extra ton of weight to the base machine, would keep all that extra weight ‘down below’ where it belonged!

This left the Cat 613 as the only motor scraper in Cat’s 2-axle range without any form of ride control.

The rest of the Cat 615 followed standard tried & tested Caterpillar design philosophy with high mounted steering cylinders with torque multiplier linkage, a hydraulically powered 2-speed elevator, and a sliding bowl floor which retracted along with the cutting edge.

In this form, the Caterpillar 615 was manufactured until 1987 when an upgraded 615C was introduced.

This featured increased horsepower – up to 260 flywheel horsepower – and updates to the electrical system which now used state of the art technology (for the day).

There were also some cosmetic changes to the tractor unit’s bodywork which tilted the radiator surround back a little and improvements in the operators’ work area.

Capacity remained the same at 16 cubic yards and, to Caterpillar’s credit, there was little variation to the machines empty weight which remained around 21 tons.

A popular elevating scraper, the 615C remained in production until 1993.

The last production model of Caterpillar’s 615 was the 615C Series II.

This was introduced in the latter half of 1993 and again featured an increase in horsepower which had now risen to 268 flywheel horsepower but the major changes were all internal.

Caterpillar redesigned the entire operators compartment making it extremely ‘user friendly’ and incorporating all of their latest electronic gadgets including the EMS monitoring system.

All of these changes resulted in a slight weight gain for the machine which now weighed 23½ tons empty.

As mentioned, this was the final production model, Caterpillar pulling the plug on manufacture in 2006 due to “slow scraper sales”.

Very disappointing really as the 615 was a good scraper.

Interestingly, the suspended front axle remained a buyer option throughout the machines production life, never being offered as standard equipment.

It is not known exactly how many 615, 615C and 615C series II machines were manufactured.

Rated at 11 cubic yards struck and 15 cubic yards heaped, the 611 utilized the tractor unit of the 615C Series II mated to an all new bowl which appears to have been manufactured by one of Caterpillar’s subsidiaries, as it does not resemble a normal Caterpillar open bowl and had a really weird apron actuating mechanism.

Axle suspension on the 611 was standard (which speaks volumes for the ride the machine must have had without it!)

Unfortunately, the 611 never really gained much popularity and was also discontinued in 2006 seemingly with low unit sales.

While the author doesn’t know exactly how many examples of the 615/615C have been imported into New Zealand, they are certainly about, and being a more modern machine, most are still in operation and likely to be so for some time into the future.

Lucky days, as the Cat 615 has been produced in 1:50 model form by NZG of Germany not once, but four times!

The first three issues were of the initial production machine and the changes are cosmetic, restricted to the different colour schemes that the real machine underwent when Caterpillar changed their trademark logo in the mid 1980s and early 1990s.

As for the fourth issue, NZG modified the tractor unit mouldings to produce a 615C and did quite a good job of it.

The models themselves, are slightly over 1:50 scale at around 1:46 but still sit well in a scraper fleet.

They have a vinyl slotted elevator that turns and a retracting floor but the overall model is not highly detailed as such.

Although the model(s) are now out of production any of them are well worth adding to an earthmoving collection.

The best place to look for one is Ebay and expect to pay between US$180 – $300 for a good boxed example.

It is to 1:64 scale and is mass produced by Norscot.

Unfortunately, this model is crude and has little to recommend it.