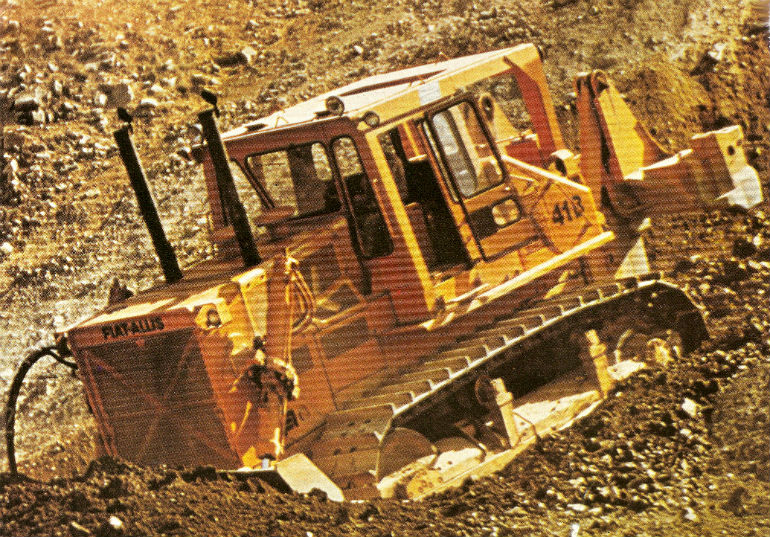 Having led the charge for larger, higher horsepower tractors following WWII, Allis-Chalmers once again was is the forefront of large tractor development when the model HD-41 was released in 1970.   By Richard Campbell

Allis-Chalmers had been working on a ‘super dozer’ for a number of years, with initial prototype machines appearing in 1963. However it had to wait for some considerable time before engines of sufficient horsepower were available and the metallurgy and technology to manufacture such a large machine had been perfected.

It should be noted that Allis-Chalmers had always been an innovative manufacturer, boasting such ‘firsts’ as the application of a torque converter to track type tractors, lifetime sealed rollers and idlers, andlifetime sealed rollers. Allis-Chalmers developed and offered these all before other manufacturers of track type tractors.

The HD-41’s target market was large earthmoving contractors, surface mining and quarry applications and reclamation where a dozer of this size could enhance production significantly and, in a lot of cases, remove the need for blasting because of the machine’s ripping capabilities.

Considerably larger and heavier than any of its competitors’ biggest machines when it was introduced, the HD-41 tipped the scales at well over 60 tons with blade and ripper, and was a formidable piece of machinery.

Although a very capable machine, there were bugs that needed to be ironed out. The most troublesome of these were in the machine’s final drives, which were prone to failure in heavy going – a fault that was never resolved satisfactorily.

As experience in actual work conditions was relayed to the factory, modifications and other fixes were produced to extend the service life of those machines already operating.

All of these changes plus other improvements came together in an upgraded version; the model HD-41B, which was introduced in 1974.

By this time, Fiat, who had had a controlling share in Allis-Chalmers since 1974, exercised its options and the company was formally known as Fiat-Allis from then on.

Fiat-Allis promptly changed the designation on their track type tractor line and the HD-41B simply became the “41B”.

Ironically, Allis-Chalmers, which had begun the giant tractor race was also the first to exit, the last 41B coming off the production line in 1982. Total production amounted to approximately 3000 machines.

Fiat-Allis also produced some other notable large track type tractors subsequent to the demise of the 41B. These included the FD40 and FD50, but were only produced for a very short time before being discontinued.

The Allis-Chalmers/Fiat-Allis HD-41 was a contemporary of the Caterpillar D10, Komatsu D455A and Dresser TD40B.

A mighty tractor required mighty power and this was provided in the form of a 524 horsepower Cummins VT-1710C turbocharged V12 diesel, with a three-speed powershift transmission supplied by Twin-Disc.

Although a very large tractor, the HD-41 could move along at 6.5 mph in third range.

As can be imagined, an engine with the horsepower output of the Cummins VT-1710 needed a fairly large radiator.

In another innovative move, Allis-Chalmers moved the hydraulic and transmission oil coolers, normally located with the engine radiator, to a position behind the operator’s cabin, thus lowering the amount of heat concentrated in the engine bay. These were provided with cool forced air by a small, hydraulically driven fan.

A 100 inch gauge machine, the HD-41 rode on a seven roller track frame and was usually shipped on 32 inch (830mm) single grouser track shoes. There were, of course, many optional sizes that could be fitted, depending on job requirements.

Simplicity was the key to controlling the HD-41.

The operator was provided with a well-cushioned seat, with all operating controls grouped for ease of operation. Steering levers, throttle and transmission range change controls were all set in a console to the operator’s left, with blade and ripper controls on the right. Master brake and decelerator pedals were on the floor.

A small, oval instrument panels provided necessary data on how the engine, transmission and hydraulics were performing.

Visibility was very good for such a large machine and the rear decking was shaped so that it dropped away sharply to allow a good view of the ripper or winch operation.

Allis-Chalmers offered a semi-U, full U and cushioned push blades for use with the HD-41, and these were all hydraulically controlled.

A Carco winch was offered, as were two different types of ripper – a multi-shank model made by Allis-Chalmers and the massive single shank rock ripper manufactured by CRC-Kelley with which many of these machines were equipped.

Open ROPS and ROPS cabs could be fitted as well as a ‘soft’ cab, usually found only on machines manufactured before 1972.

As mentioned earlier, there were also other width track shoes and guarding packages to outfit the HD-41 for all manner of service.

Although several contractors showed interest in the machine, especially those involved in the Waitaki Power Scheme, there have been no Allis-Chalmers HD-41s, or Fiat-Allis 41Bs for that matter, imported into New Zealand.

To date, the largest Allis-Chalmers track type tractor to grace New Zealand shores had been a model 31, roughly equivalent to a D9H in size.

For those of you who collect bulldozers, there are three models of Allis-Chalmers’ giant to choose from – two in 1:50th scale and one in 1:25th scale.

First up is Conrad’s model of a Fiat-Allis 41B to 1:50th scale. This is the oldest of the three models and it certainly shows it, being quite basic and actually under scale at around 1:60th. It is fitted with an open ROPS, rubber tracks, semi-U blade and multi-shank ripper. Although out of production, examples can be found on Ebay reasonably cheaply.

Next is EMD’s offering which is to 1:50th scale and represents an Allis-Chalmers HD-41. It comes equipped with a cushioned push dozer or can be purchased with an open ROPS, full U-blade and multi shank ripper. EMD models are expensive and hard to find, however, they are very good models and have realistic metal tracks.

Lastly is the magnificent 1:25th scale model of a mid-production Allis-Chalmers HD-41 by First Gear. This is a very big model even in 1:25th scale and weighs almost 7kg. Fitted with a soft cab, semi-U blade and single shank Kelley ripper, this model is so well detailed the only thing missing is noise, smell and oil leaks.

Classic machines: The Caterpillar 631A scraper